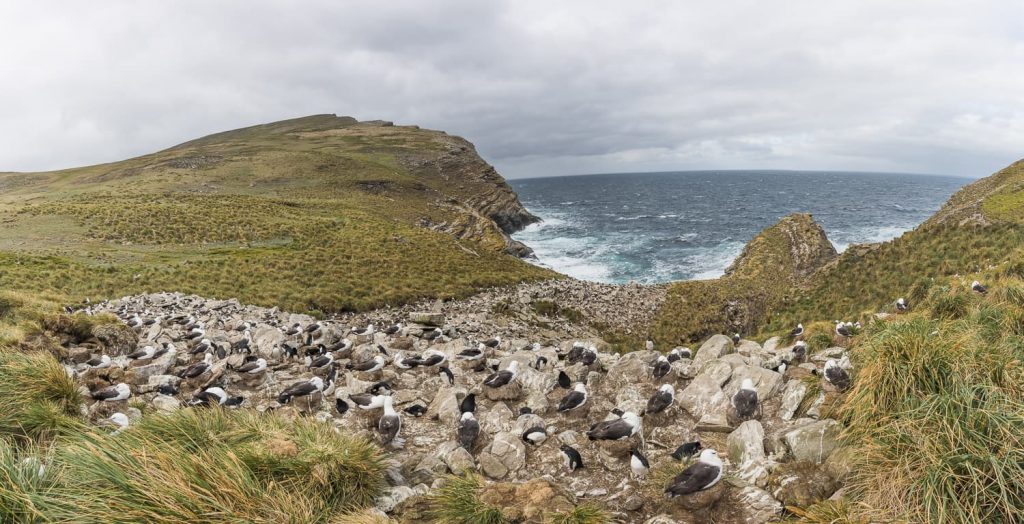 Five species of penguin – Rockhopper, Magellan, Gentoo, King, and Macaroni penguins all call the Falkland Islands their home. The largest breeding population of Black-Browed Albatross also live on this island. Some of their largest groups populate remote inaccessible islands, making the Falkland Islands the ideal viewing destination. Seal species breed on this island as well. The elephant seal, sea lion, and fur seal specifically use this island as their breeding location. Fifteen species of whales and dolphins call these islands home, and at least 200 species of birds live here too!

Read more about penguin viewing and penguin species in our penguin guide!

The islands were first seen by John Davis, the English explorer, in 1592. In 1690, John Strong of England made the first landing on the Western shore at Bold Cove, Port Howard. Those who came to the islands afterwards were hunters. They sailed to the Falklands for either for seal, whales, or penguins. These early visitors often brough cattle and other domestic animals with them, which quickly spread across the islands.

In 1833, Britain was re-established as the islands’ sovereign. Stanley became the capital in 1845, named after Geoffrey Smith Stanley, the Colonial Secretary. Falkland citizens fought in both World War One and Two. Visitors today can see the monument on Ross Road which commemorates the first World War. The Cross of Sacrifice is also visitable for tourists, and commemorates the second World War.

Currently, the Falkland Islands are home to fishermen, farmers, and artisans – and many sheep!

The weather in the Falkland Islands generally stays between 32 degrees Fahrenheit, and 61 degrees Fahrenheit. It stays chilly year-round and the area is known for it’s constant wind. Plan to bring layers appropriate for the conditions. Also, don’t forget to check the forecast for the days you plan to come ashore!