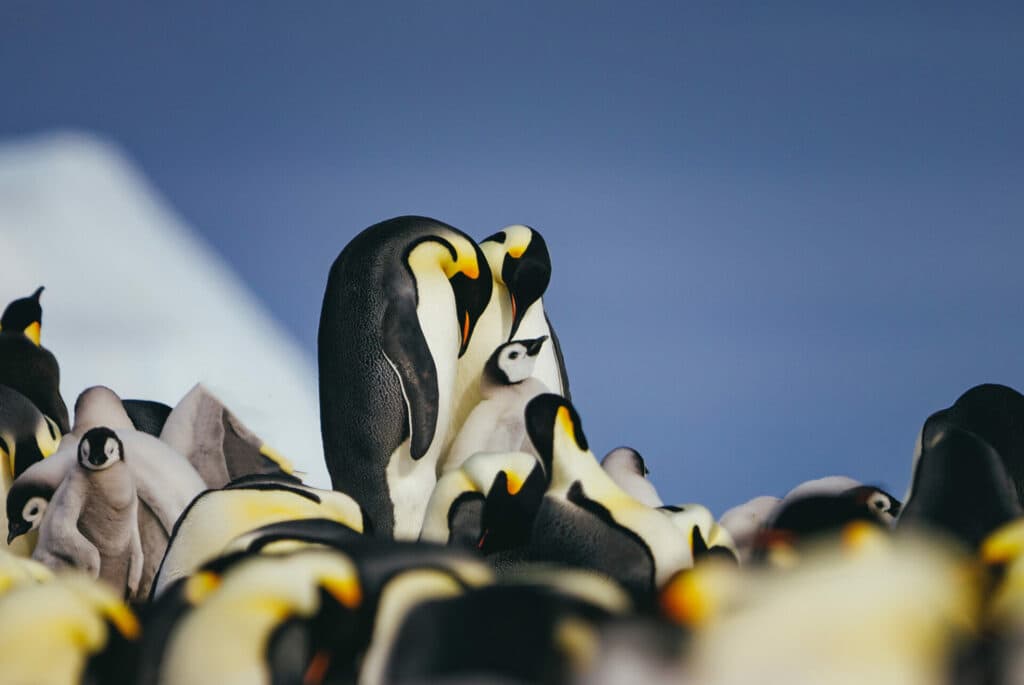 In 2004, Quark Expeditions made polar history when they conducted the first-ever ground visit to the remote emperor penguin colony near Snow Hill Island, Antarctica. Driven by a true expeditionary spirit—and guided by years of polar expertise—our team sailed past masses of dense ice and thick, tabular icebergs in the Weddell Sea to experience the legendary rookery, which now numbers 8,000 breeding pairs of emperor penguins. Today, it is one of the most exclusive wildlife viewing experiences on the planet. We invite you—almost two decades after our milestone visit of 2004—to embrace the thrill of the search as we once again set out to visit to the emperor penguins at Snow Hill Island. Experience a true polar quest as we journey on our new ship, Ultramarine, which is equipped with two twin-engine helicopters that will fly guests to the vicinity of this rarely-visited rookery, whereupon they will walk across the thick sea ice to stand within metres of the most coveted penguin species on the planet. Anticipate scenes reminiscent of “March of the Penguins” and BBC’s “Frozen Planet.” Just imagine the penguins tobogganing across the ice towards the sea. Such wildlife moments are too precious for words!

Upon arriving in this fascinating city, known for its architecture and rich European heritage, you will independently transfer to your group hotel (pre-expedition hotel night included in mandatory transfer package).

Fly to Ushuaia and Embark

After an early breakfast at the hotel, your group will transfer to the airport and board our private charter flight to Ushuaia, Argentina. Upon arrival, you will be transferred from the airport to a central downtown location to enjoy time on your own to explore quaint Ushuaia—the world’s southernmost city—before making your way to the pier. After a late afternoon embarkation, you will sail along the historic Beagle Channel, which transects the Tierra del Fuego archipelago in the extreme south of South America. Enjoy the air of anticipation as you depart—the next land you see will be the Antarctic!

The unpredictable and exciting Drake Passage, which lies at the confluence of the Pacific, the Atlantic and the Southern oceans, is an adventure unto itself. While being well taken care of by our expert onboard staff and expedition team, you’ll have plenty of time to gaze out at the expansive ocean waters, photograph seabirds as they swoop around the ship, and get to know your Expedition Team and fellow travelers.

Navigating into the Weddell Sea

Onboard presentations by world-respected experts will enrich your polar quest, conveying what it was like a century ago for the brave polar heroes who embraced the unknown. You’ll also learn more about the ice-dwelling emperor penguins.

Weddell Sea and the Quest to Land at Snow Hill

The journey toward Snow Hill Island will put you in explorer mode as the captain and Expedition Leader keep you updated through weather briefings, meteorological and sea ice condition reports. The thickness of ice will determine how close Ultramarine can get to Snow Hill Island, then our twin-engine helicopters will take over. Like summitting a mountain from base camp, parties will set out from Ultramarine towards the emperor penguin colony. Their adventure begins with an extended helicopter transfer that will reveal a landscape of snow-capped peaks and apartment-building-sized tabular icebergs. The rookery itself is located on the sea ice off the south coast of Snow Hill Island and the landing will be as close to the penguins as possible, yet at a safe distance to avoid disturbing the birds. Upon landing, your party will walk across the ice to the fabled emperor penguin colony. The wind. The ice beneath your feet. Walking next to paths in the snow carved by penguins that came before. And then there are the incredible sounds of the penguins in the distance as you march toward one of the rarest wildlife opportunities on the planet: the colony of thousands and thousands of rarely-seen emperor penguins. The goal of the expedition is to get every guest to the remote rookery once. The Expedition Team and special experts will be close by to answer your questions and ensure you take in everything there is to see. You’ll observe close up how the emperor penguins behave as a tight-knit community, how they care for their young, and how they body surf across the ice in a way that can only be described as quirky yet efficient. The helicopter expedition in search of the emperor colony might just be the adventure of a lifetime And while at base on Ultramarine with your attentive Expedition Team, you’ll be immersed each day in the polar experience of the Weddell Sea. Daily activities will include Zodiac cruising among the icebergs, adventuring and learning while atop the ice, paddle-on-top kayaking, or working with our team to observe the weather forecasting and ship operations up close. A particularly enriching component of your voyage will be the bespoke educational programs tailored specifically for this expedition that offer both traditional (lecture format) and hands-on opportunities for learning about this fascinating region. Each day our polar experts, who include penguin scientists, biologists and polar historians, will present on various aspects of emperor penguins and their behaviors, ice formations such as the tabular icebergs which you’ll see from the deck of your ship, and the experiences of polar explorers who braved the Weddell Sea over a century ago. Or you might, on one of these days, decide to take the polar plunge, or test your balance on a stand-up paddleboard. Then again, maybe you’ll enjoy a little pampering. If so, you can choose from Ultramarine’s excellent onboard amenities, including the spa, sauna and fitness room. The emperor penguin colony at Snow Hill is the goal of this expedition. However, if weather or ice conditions prevent us from visiting the colony or shorten the duration of our visit, we may explore some of these other sites. Your possible landings in Antarctica will take place on the eastern side of the Peninsula, which is an extension of the Transantarctic Mountains and is the most northern stretch of Antarctic land. Brown Bluff An immense cliff of volcanic rock, towers 2,225 feet (678 meters) over rookeries of Adélie and gentoo penguins, some of which will be incubating their eggs. Devil Island The Swedish Antarctic Expedition of 1901-04 discovered the narrow island, which is 1 mile (1.6 km) long and has a low summit at each end. Hope Bay Three members of the Swedish Antarctic Expedition (1901-04) spent the winter in a hut on the shores of Hope Bay. The hut is located close to the jetty of Esperanza Station, an Argentine research station. Paulet Island Located in the northwestern Weddell Sea, Paulet Island is home to a large Adélie penguin rookery. With a volcanic cone that rises 1,158 feet (353 meters), the island reminds you that this was once a very active landscape. In addition to penguins, you may be interested in visiting a historic hut built by members of the Swedish Antarctic Expedition of 1901-04. A cross marks the gravesite of crew member Ole Wennersgaard. Seymour Island Northeast of Snow Hill Island is a smaller island that was originally mistaken for a cape. Seymour Island is significant for fossil finds and for the remains of the KT Boundary, which marks the transition between the Cretaceous Period (dinosaurs and reptiles) and the Tertiary Period (mammals) of geological times. This era is known for the mass extinction of many forms of life, including dinosaurs.

The journey back across the Drake Passage provides a final opportunity to enjoy the invigorating Southern Ocean air. Spend time on the deck watching for seabirds and scouting for whales, enjoy presentations by your Expedition Team, and celebrate the experiences you've shared getting off the beaten track in the remarkable world of Antarctica.

Disembark in Ushuaia and Fly to Buenos Aires

You will arrive in Ushuaia in the morning and disembark after breakfast. The mandatory transfer package includes a tour of Tierra del Fuego National Park for a taste of Patagonia, after which you’ll transfer to the airport for the return group charter flight to Buenos Aires. 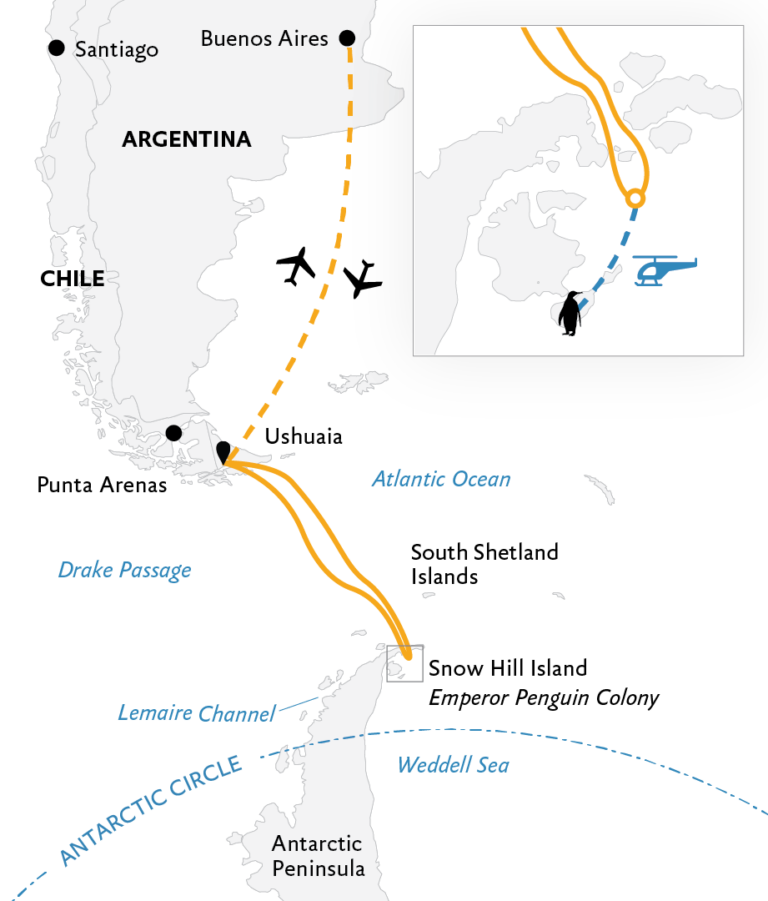