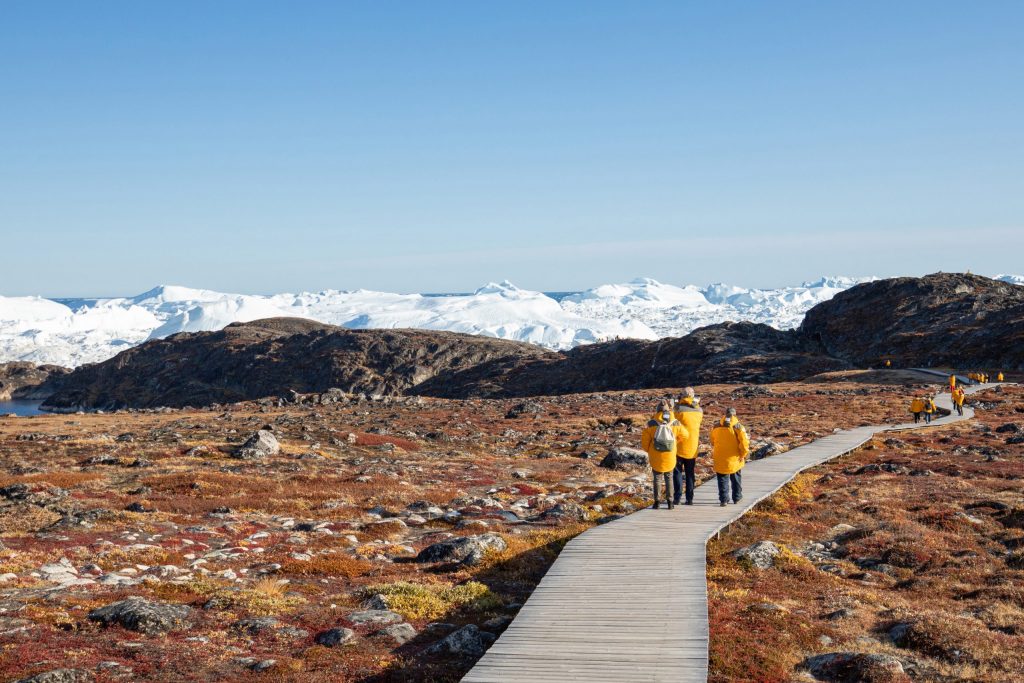 Enjoy an ultra-immersive exploration of Greenland’s most remote regions, sailing the icy waters of the rarely traveled southeast coast, traveling down to the lush southern tip, and stopping to visit local communities and observe imposing glaciers of the west coast. Visits to picturesque villages and Norse ruins will provide guests with an intimate look into Greenland’s distinct culture and history, while the rugged landscape, highlighted by dramatic fjords, imposing glaciers, towering mountains and verdant valleys, will leave you breathless. On Essential Greenland: Southern Coasts and Disko Bay, spectacular, unspoiled wonders await at every turn.

Arrive in the Icelandic capital and make your way to your included hotel. You will have the rest of the day to explore the city on your own.

This afternoon, you’ll board your vessel and begin your expedition. Get ready for a great adventure ahead!

As we sail across the Denmark Strait, your Expedition Team will teach you about the wildlife and enthralling history of Greenland, its fascinating geology, ecology and climate, and the incredible sights you will soon explore. Staff will also keep watch for the seabirds you’ll likely see soaring around your ship, as well as the whales that can be encountered here.

Your exploration of Greenland begins with East Greenland, one of the least visited and most remote parts of the island. Your days sailing along the coast will be guided by weather and ice conditions, with each day and each excursion presenting new adventures. The region is a sight to behold, boasting a mesmerizing maze of vast glaciers, steep mountains and breathtaking fjords. One location we hope to visit if conditions allow is Skjoldungen Fjord (Inugsuarmiut), where you’ll cruise between the mountains to view glaciers deep within the fjords. The narrow part of the fjord provides an ideal place to put our Zodiacs in the water for a more in-depth exploration. If conditions allow, you may also see the site of an abandoned Inuit settlement, whose inhabitants were relocated to larger, more accessible towns around 1961. If you’re feeling even more adventurous, perhaps you’ll treat yourself to an optional paddling excursion (extra cost), an unforgettable opportunity to glide past icebergs and glaciers and capture some photographs from a unique perspective. Another possible destination is Lindenow Fjord (Kangerlussuatsiaq), and if conditions are favorable, it’s a great spot for hiking through lush and varied flora, surrounded by epic mountain vistas. This rarely visited deep fjord is fed by a number of glaciers and offers ample opportunities for your camera to get a workout.

Sailing on, we’ll explore Greenland’s fertile southern coast. Nicknamed Arctic Patagonia, this region is as rich in spectacular scenery as it is in history and culture. Here, it’s easy to see why Erik the Red gave Greenland its name: everywhere you look rewards with vistas of icy waters set against a backdrop of soaring mountains and unbelievably lush, green valleys. Scattered around the shores of the fjord systems that dominate the area are several small settlements, both ancient and present day, making South Greenland an ideal place to explore. The magical Prins Christian Sund (Ikerasassuaq), a complex maze of narrow fjords and channels, is a great place for cruising. You’ll explore this stunning sound, home to calving glaciers, jagged mountains and sheer cliffs that plunge dramatically into the water. Sailing through this fjord from the vantage point of your ship or a Zodiac is an exhilarating experience. If conditions allow, venturing ashore provides opportunities for all levels of hiking. Steeped in Norse history, the southern coast of Greenland provides plenty of places to learn about this ancient culture. One such landing we hope to make is at Hvalsey (Qaqortukulooq), the site of Greenland’s largest and best-preserved Norse ruins. Exploring the remains of the circa 14th-century church will feel like stepping back in time, as the building appears much as it did when it was abandoned in the 15th century and the surrounding fells and fjord remain similarly untouched. The little village of Igaliku, home to about 25 inhabitants, is Greenland’s oldest sheep-farming settlement. It’s a charming place to go ashore, as sheep peacefully graze on the grass, surrounded by bloom-covered rolling valleys and tall mountains. The area is also known for its storied past, as evidenced by the remarkable red sandstone ruins of the Gardar cathedral (the largest church in Greenland in the Middle Ages) and bishop’s residence, which date back to the early 12th century, when Greenland’s first bishop was appointed. Wandering the foundations, excavated in 1926, you’ll get to see a bit of history firsthand as you learn about this interesting relic of the Viking period. Together with four other historic farming communities, Igaliku is part of the newly established UNESCO World Heritage Site Kujataa.

Boasting spectacular glaciers, mountainous landscapes, and vibrant communities, the west coast of Greenland will leave you awestruck. Heading north, each day we hope to take Zodiac excursions from the ship to explore local bays, channels and landing sites, discovering some of the quaint communities dotting the islands and fjords in the region and cruising in some of Greenland’s most picturesque places. The west coast is home to Nuuk, the charming Greenlandic capital. You’ll have time to wander the streets of the historic Old Nuuk neighborhood and see the Hans Egede Church and Hans Egede statue near the waterfront, both named after the missionary who founded the settlement. History buffs will want to visit the national museum to view the famous Greenlandic mummies, found under a rock outcrop in 1972 by two brothers who were ptarmigan hunting. Sisimiut is another interesting place to go ashore. You’ll have time to wander the town’s historic area, where several 18th-century colonial buildings still stand, including Greenland’s oldest surviving church. You’ll also be treated to a traditional kayaking demonstration. Experiencing a cultural resurgence, the kayak is a symbol of Greenland and can be traced back over 4,000 years to the Inuit, who used the vessels for hunting and transport. Another beautiful locale, and one of west Greenland’s highlights is the Ilulissat Icefjord, a UNESCO World Heritage Site. Home to the world’s most productive glacier in the northern hemisphere, Jakobshavn Glacier or Sermeq Kujalleq in Greenlandic, this is a great place to enjoy a Zodiac excursion to experience icebergs from a unique perspective not afforded by land. Venturing ashore in the nearby town, Ilulissat (which means “iceberg”), rewards with its own spectacle: enormous bergs floating out to Disko Bay. A hike from the town to the icefjord will allow you to view this unforgettable river of ice from the rocky shore. Given that in the past, it has been known for having more sled dogs than people, it’s not surprising that Ilulissat is the birthplace of the first European to traverse the Northwest Passage by dogsled, explorer Knud Rasmussen. Surrounded by sea and mountains, the fishing community of Itilleq (meaning “crossing place”) is situated in a scenic hollow on a small island, about a mile (2 km) above the Arctic Circle. Explore traditional wooden houses painted in a rainbow of colors, chat with the locals and join a customary football (soccer) match between visitors and residents, and you’ll be experiencing Itilleq’s famous friendly vibe in no time.

Disembark in Kangerlussuaq and Fly to Reykjavik

Enjoy one more Zodiac ride to shore, where you’ll board your charter flight back to Reykjavik, Iceland. Upon arrival in Reykjavik, we will transfer you to your included hotel.

Today, you can make your way home at your leisure or spend some time exploring this artistic city.