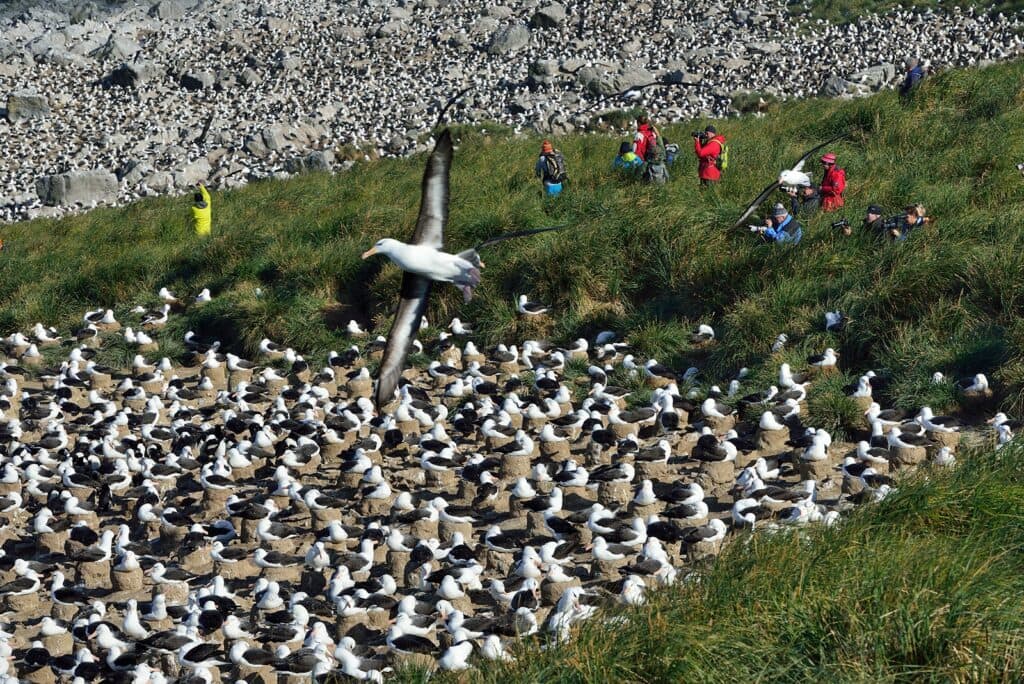 A cruise to the Falkland Islands, South Georgia & the Antarctic Peninsula. Visit some of the most beautiful arrays of wildlife on Earth. This journey will introduce you to at least 6 species of penguin and a whole lot of Antarctic fur seals!

You embark from Puerto Madryn in the afternoon, your prow aimed for the Falkland Islands. Golfo Nuevo is renowned for its visiting southern right whales, so you have a good chance of spotting one as you sail toward the open ocean.

Carcass Island – Despite its name, this island is pleasantly rodent-free and hence bounteous with birdlife. Anything from breeding Magellanic penguins and gentoos to numerous waders and passerine birds (including Cobb’s wrens and tussock-birds) live here.

Prion Island – This location is closed during the early part of the wandering albatross breeding season (November 20 – January 7). The previous summer’s wandering albatross chicks are almost ready to fledge, and adults are seeking out their old partners after a year and a half at sea.

Salisbury Plain, St. Andrews Bay, Gold Harbour – These sites not only house the three largest king penguin colonies in South Georgia, they’re also three of the world’s largest breeding beaches for southern elephant seals. Only during this time of year do they peak in their breeding cycle. Watch the four-ton bulls keep a constant vigil (and occasionally fight) over territories where dozens of females have just given birth or are about to deliver. You can also see a substantial number of Antarctic fur seals here during the breeding season (December – January).

In the afternoon of day 11 and depending on the conditions, we will start sailing southwards in the direction of the South Orkney Islands.

Depending on the conditions, you might visit Orcadas Base, an Argentine scientific station on Laurie Island in the South Orkney archipelago. The personnel here will happily show you their facility, where you can enjoy expansive views of the surrounding glaciers. If a visit isn’t possible, you may instead land at Signy Island’s Shingle Cove.

If conditions aren’t favorable to enter the Weddell Sea from the east, the ship will set course for Elephant Island and head into the Bransfield Strait, between the South Shetland Island's and the Antarctic Peninsula.

On Half Moon Island, Chinstrap penguins and Weddell seals often haul out onto the beach near Cámara Base, an Argentine scientific research station.

On Deception Island, the ship plunges through Neptune’s Bellows and into the flooded caldera. Here you can find an abandoned whaling station, and thousands of cape petrels. A number of kelp gulls, brown skuas, south polar skuas, and Antarctic terns can be spotted too. Wilson’s storm petrels and black-bellied storm petrels also nest in the ruins of the whaling station in Whalers Bay. As an alternative, you can take part in activities near Telefon Bay, further inside the caldera.

This extended voyage gives you the chance to sail even farther down the icy coast of the western Antarctic Peninsula. There are several opportunities for great landings where you might set foot on the Antarctic Continent, surrounded by an epic landscape of alpine peaks and mammoth glaciers calving at sea level. Gentoo penguins, leopard seals, Weddell seals, humpback whales, and minke whales are often seen here.

You arrive and disembark in Ushuaia, commonly held to be the world’s most southern city. It is located on the Tierra del Fuego archipelago, nicknamed the “End of the World.” But despite this stopping point, the wealth of memories you’ve made on your Antarctic expedition will travel with you wherever your next adventure lies.