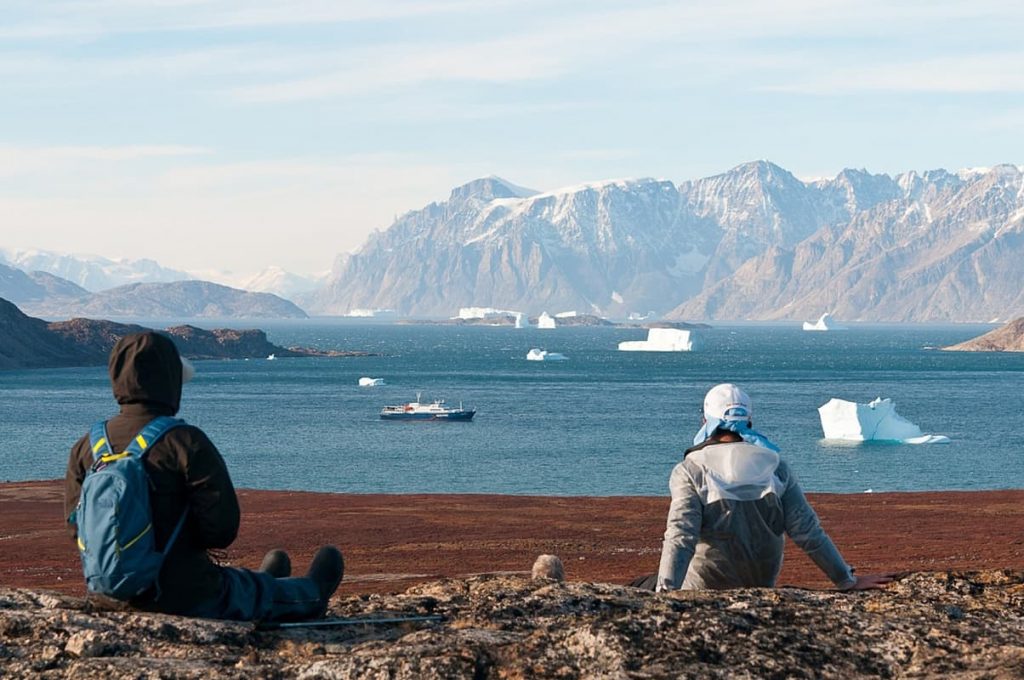 Join us on an adventurous Arctic voyage through the fjords of Greenland. You will visit areas that are home to seals, whales, and musk oxen.

From Iceland’s international airport Keflavik and its port where you will embark the vessel, you depart for your Arctic adventure.

We sail westward in the warm Gulfstream Current and later in the cold East Greenland Current with a multitude of sea life (whales, seals, seabirds) at the mixing zones of these waters.

In Nansen Fjord, surrounded by enormous glacier fronts, we spot Gunnbjörns Fjeld. At 3.700 m, it is the highest mountain north of the Arctic circle. Near the glacier fronts we may see bearded seals and at the mouth of the fjord large groups of harp seals.

This attractive fjord with several side arms, was discovered and first described by the Frenchman de Blosseville in 1833. We have seen polar bears and narwals there at a previous visit.

Today you reach Scoresby Sund, sailing along the glaciated Volquart Boons Kyst. You may also enjoy a Zodiac cruise past one of the glacier fronts, along with a visit to the basalt columns and ice formations of Vikingebugt.

The afternoon goal is to visit Danmark Island, where you find the remains of an Inuit settlement abandoned around 200 years ago. The circular stone tent rings indicate the summer houses, while the winter houses can be seen closer to a small cape. The sites are well preserved, with easy identifiable entrances, bear-proof meat caches, and grave sites. In the evening, you continue sailing the berg-crowded fjords to the west.

The goal is a Zodiac cruise near Røde Ø, one of the world’s most cherished iceberg attractions: The austere blue-white of the icebergs sets sharp against the brooding red backdrop of the sediment slopes. The afternoon plan is to sail through the northern parts of Røde Fjord, with the chance to see musk oxen and warm late summer foliage.

In the morning you encounter colossal icebergs, some over 100 meters (328 feet) high and more than a kilometer (.62 mile) long. Most of them are grounded, as the fjord is only about 400 meters deep (1,312 feet). You then land near Sydkap, with fine views of Hall Bredning and a good shot of seeing Arctic hares.

Today you make a tundra landing at a lagoon, just west of Kap Stewart. The afternoon stop is Ittoqqortoormiit, the largest settlement in Scoresbysund at about four hundred inhabitants. At the post oﬃce you can buy stamps for your postcards, or just stroll around to see the sled dogs and drying skins of seals and musk oxen. In the afternoon you sail south, passing the picturesque landscapes of the Blosseville Coast.

The second half of the day you spend in Blomsterdal (Flower Valley) near Antarctic Havn, a where we often spot groups of musk oxen. Another possibility is Ørsted Dal, with landing at Cape Seaforth.

We sail through Antarctic sound and make a landing on Marie Island. We pass Teufelschloss (Devil’s Castle), a mountain with layered geology. On the other side of the fjord is Blomsterbugt (Flower Bay) and the intended landing site.

In the morning we sail into Foster Bay and land at Margrethedal, where at the east side of the river are remains of Thule culture from some centuries ago. The lower tundra areas near the shores are populated by musk oxen.

You may eventually see the pointed mountains of Spitsbergen, when sailing along the jagged edge of the east Greenland sea ice. Keep watch for whales and migrating seabirds here.

Even the greatest journeys eventually come to an end. Today you disembark in Longyearbyen, taking home memories that will accompany you wherever your next adventure lies.

a chance (about 30%) that ice will obstruct passage into the fjord system. In that case we will resort to areas south of Scoresbysund, as far south as Ammassalik and / or Southeast Spitsbergen. All itineraries are for guidance only. Programs may vary depending on ice, weather, and wildlife conditions. Landings are subject to site availabilities, permissions, and environmental concerns per AECO regulations. Official sailing plans and landing slots are scheduled with AECO prior to the start of the season, but the expedition leader determines the final plan. Flexibility is paramount for expedition cruises. The average cruising speed of our vessel is 10.5 knots.