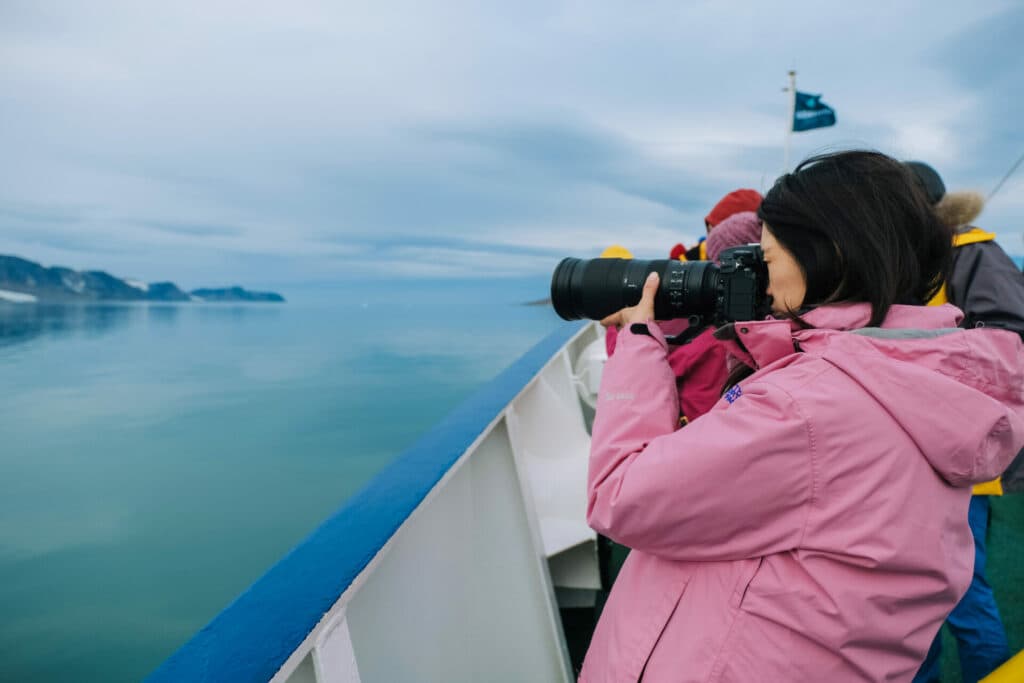 Sailing to Raudfjorden, on the north coast of Spitsbergen, you take in an expansive fjord spilling with glaciers – and maybe even visited by ringed and bearded seals. The cliffs and shoreline of this fjord also support thriving seabird colonies, rich vegetation, and the possibility of polar bears. In the evening you sail by the island of Moffen, where you can find a large herd of walruses.

You next sail through Beverleysundet, formerly navigated by the Swedish-Russian Arc-of-Meridian Expedition in 1898. From here you push east along Scoresby Island into Rijpfjord, where the German Wehrmacht operated the weather station Haudegen (now off-limits) until September 1945. The aim in Zorgdragerfjord is to have one group walk the eastern shore while another walks the north side of Arkvatnet, through Havsuldalen to the entrance of Duvefjorden.

Reaching Phippsøya, in the Seven Islands north of Nordaustlandet, you’re now at 80° north and just 870 km (540 miles) from the geographic North Pole. Polar bears and walruses inhabit this region. In the afternoon you venture to your northernmost point, near the 82nd parallel. While retracing your route west, keep watch for polar bears and elusive Greenland (bowhead) whales.

About 40 nautical miles west of Spitsbergen, you sail the edge of the continental shelf. Here fin whales forage during the summer in the upwelling zones (where cold, nutrient-rich water wells up from below the sea’s surface) that run along the Spitsbergen banks. At the mouth of Kongsfjorden, you have a good chance of sighting minke whales.

Walruses sometimes haul out in Forlandsundet, your next stop – though this late in the season, they may have already departed. Alternately, you might sail into St. Johns Fjord or south to the mouth of Isfjorden, landing at Alkhornet. Seabirds nest on these cliffs, Arctic foxes search below for fallen eggs and chicks, and reindeer graze the sparse vegetation. You arrive in Longyearbyen later that night.