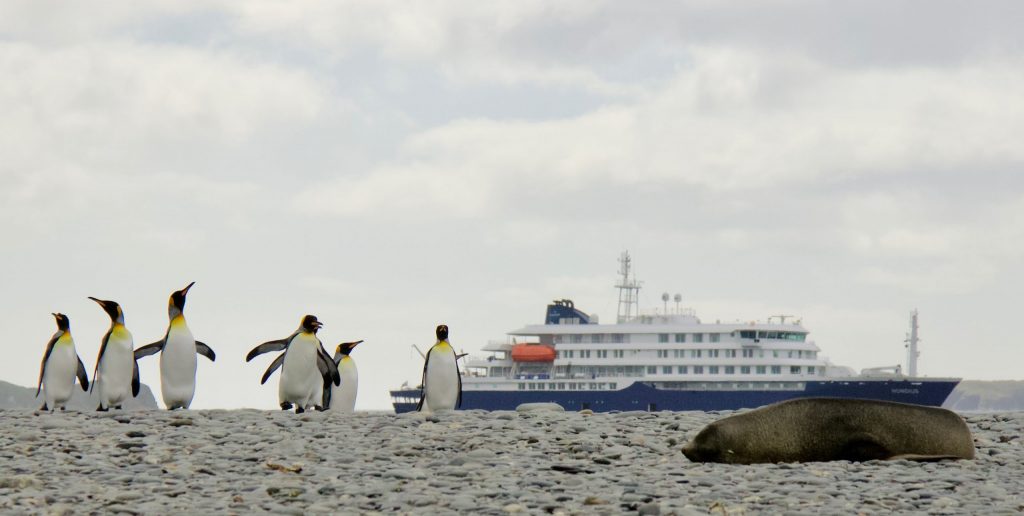 This adventurous expedition explores one of the least-visited areas on Earth, Antarctica’s amazing Weddell Sea. After visiting some of the same sites legendary explorer Ernest Shackleton’s charted in South Georgia, we’ll enjoy the Weddell’s exotic wildlife and colossal tabular icebergs.

Starting in South Georgia after leaving Ushuaia, we will be on the trail of famed polar explorer Ernest Shackleton and his ship Endurance, experiencing the Weddell Sea’s amazing wildlife and tabular icebergs before returning via Elephant Island.

The tabular icebergs and other ice formations offer fantastic landscapes and unique photo opportunities. Especially on the east side of the Weddell, the chance of landings can be limited due to these ice formations. Zodiac cruises and possible ice landings are wonderful alternatives, if conditions allow.

The Weddell Sea is home to a large number of orcas, humpbacks, and minke whales as well as leopard, Weddell, and crabeater seals. Several penguin species can be seen there too.

On the ship, our structured educational program will complement other activities. You will have the chance to learn all about the area’s wildlife, landscape, history, political status, and more. We actively participate in citizen science projects, and you can also participate in such projects.

Enroute to South Georgia, you now cross the Antarctic Convergence. The temperature cools considerably within the space of a few hours, and nutritious water rises to the surface of the sea due to colliding water columns. This phenomenon attracts a multitude of seabirds near the ship, including several species of albatross, shearwaters, petrels, prions, and skuas.

Entering the South Georgia Maritime Zone, one of the largest protected waters in the world, we sail past the Shag Rocks. These impressive rocks lay 240km (150 miles) west of South Georgia and are home to several thousand South Georgia shags. The area around the rocks is known for its abundance of larger marine mammals, which feed on this comparatively shallow area of the South Georgia Ridge.

After reaching South Georgia, you will have the chance to visit some of the following sites:

Prion Island – This location is closed during the early part of the wandering albatross breeding season (November 20 – January 7). From January on, the breeding adults have found their partners and are sitting on eggs or nursing their chicks. Enjoy witnessing the gentle nature of these animals, which possess the largest wingspan of any birds in the world.

Salisbury Plain, St. Andrews Bay, Gold Harbour – These sites not only house the three largest king penguin colonies in South Georgia, they’re also three of the world’s largest breeding beaches for Antarctic fur seals. Literarily millions breed on South Georgia during December and January. By February the young fur seals are curious and playful and fill the surf with life and fun and large elephant seals come to the beaches to moult.

In the afternoon of day 6 and depending on the conditions, we will start sailing southwards in the direction of the South Sandwich Islands.

Like Shackleton in December 1914 on the Imperial Trans-Antarctic Expedition, also known as the Endurance Expedition, we leave South Georgia and aim for the South Sandwich Islands and the Weddell Sea.

While we are unable to land here, we may be able to make a Zodiac cruise among the amazing scenery of this active volcanic area. Passing between Thule and Cook Islands will be one of the trip’s many highlights and will make an everlasting impression.

There is a good chance we’ll encounter humpback and minke whales in this area. On and around the islands, we also have the chance to spot brown skuas, chinstrap or Adélie penguins, and several species of albatross: grey-headed, black-browed, and wandering.

We next sail toward the Antarctic continent in the direction of Queen Maud Land and Neuschwabenland (New Swabia) on the northeast side of the Weddell Sea.

Our first destination in Antarctica is New Swabia, between 20°E and 10°W in Queen Maud Land. This area was explored by Germany during the third German Antarctic Expedition of 1938 – 1939, led by Alfred Ritscher. The purpose was to find an area in Antarctica for a German whaling station and scout a possible location for a naval base.

In an attempt to claim the region, Nazi flags were placed on the sea ice along the coast locations. Survey flights also airdropped aluminum arrows with swastikas.

Sailing deep into the Weddell Sea, chances are we can spot crabeater, leopard, or Weddell seals. If we are lucky, we might even see emperor penguins. Humpback, orca, and minke whales are also present in this area, along with various birdlife.

Ice conditions in the Weddell Sea vary seasonally. We will encounter a vast nautical wilderness of sea, and while heading to high latitudes (far south) will enjoy the raw beauty and power that makes Antarctica so special. It will become apparent why it took so long to discover the Great White Continent and how tough it must have been for Shackleton’s expedition.

We’ll make a circular route toward the Brunt Ice Shelf and along the Luitpold Coast, discovered and named during the second German Antarctic expedition (1911 – 1912) of Wilhelm Filchner. If conditions allow, we will have opportunities for a Zodiac cruise and possibly an ice floe landing.

We now head west toward the Filchner–Ronne Ice Shelf before changing course north, following the coast along the eastern side of the Antarctic Peninsula and Larsen Ice Shelf. This brings us close to the spot where Shackleton’s vessel Endurance was trapped in pack ice during his Imperial Trans-Antarctic Expedition (1914-17), drifting toward the Antarctic Peninsula before ultimately sinking. In an exciting conclusion to this story, the wreck was discovered on March 5, 2022, the 100th anniversary of Shackleton’s burial, after 107 years below the Weddell Sea waves. While we can’t get close to the discovery site due to pack ice, we will be in the area where the ship was trapped and abandoned. There are colonies of 6,500 emperor penguins nearby, so we hope to see one or more in this area.

As we reach the northern section of the Antarctic Peninsula, we enter the area of Erebus and Terror Gulf. Far-wandering emperor penguins often perch on Snow Hill Island’s numerous ice floes, possibly offering you another opportunity to spot these emblematic creatures. If conditions allow, we may attempt a landing on James Ross Island.

This morning we hope to land at one of the most scenic locations in the northern Antarctic Continent, with a large Adélie penguin rookery, gentoo penguins, and nesting snow petrels also to be found. Sheer canyon walls, fallen boulders, and beautiful volcanic creations capped with ice make Brown Bluff a truly unforgettable location.

Across the Antarctic Sound is Kinnes Cove, where you can see the nearby Madder Cliffs with their subtle red coloration as well as possible gentoo penguins.

This is the starting point from which Shackleton left to find help for his stranded crew. Using only a small lifeboat, the James Caird, he and five of his men sailed to South Georgia, then walked 36 hours to Stromness. It’s hard not to marvel at how they accomplished that herculean feat.

Twenty-two members of his Imperial Trans-Antarctic Expedition, also known as the Endurance Expedition, were stranded on Elephant Island after their vessel Endurance sank in the Weddell Sea. It took four and a half months to complete the legendary rescue.

Conditions on Elephant Island are severe. The coastline is mostly made up of vertical rock and ice cliffs highly exposed to the elements. If possible, you will take the Zodiacs to Point Wild, where the marooned members of Shackleton’s expedition miraculously managed to survive.

Your return voyage is far from lonely. While crossing the Drake, you might see some of the same wildlife encountered at the start of your voyage: albatrosses, petrels, maybe even a minke whale spouting up sea spray.