Not sure what kind of animals to expect to see in Antarctica? Let me tell you. Many of the animals you might see on your trip are not solely land animals. There are three main animals to expect to see while on your trip. Seals, whales, and of course, penguins. There are different types of each species to see. If you are interested in learning more about traveling to Antarctica, take a look at our Antarctica Travel Guide!

Let’s start with seals. There are four different seal types at Antarctica: leopard, crabeater, Weddell, and southern elephant. Most are nonchalant around humans, although leopard seals have been known to get aggressive toward smaller boats. Attacks are not common, but it is best to steer clear of getting close to them. Seals are carnivores and tend to eat fish, squid and krill. Although leopard seals will eat penguins and sometimes other seal species. Seals have adapted eyesight that helps them see underwater which helps when they are diving to deep depths, as deep as 600 meters. 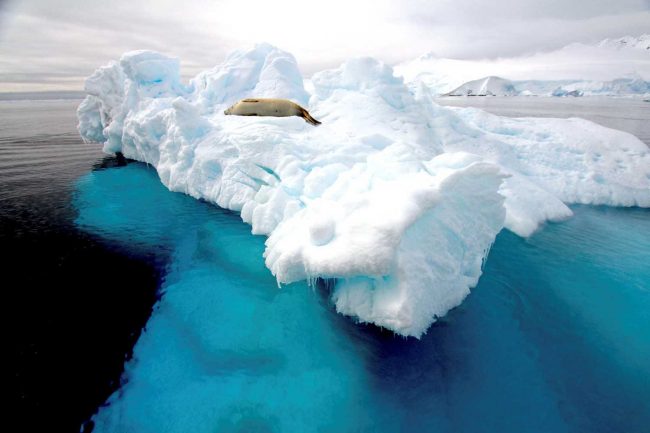 Now, depending on time of year, you will see a few different whales. The most common is orca whales (also known as killer whales). They are the most aggressive in the whale family, yet are not known for attacking humans, especially in the wild. They tend to stick to fish, squid, and plankton. But did you know that orca whales are actually part of the dolphin family? They are the largest of the dolphin family and most people do not know they are not actually in the whale family. Other whales you may expect to see are the blue whale, humpback, and the fin whale. Most whales will be around during the austral summer, which is from December to February.

Blue whales are absolutely massive, averaging about 88 feet long, but can reach up to 110 feet and can weigh up to 150 tons! That is 300,000 pounds! Like the blue whale, the humpback is also a baleen whale but sizes in significantly smaller. The humpback is on average about 62 feet long and 53 tons. This species migrates thousands of miles every year to escape winter waters and feed. They also have the most complex of whale songs, and they have a wide variation to them. These calls can be heard for miles by other underwater species.

The fin whale is the second largest of the whale species and weighs in around 80 tons, and about 65-80 feet long. Like most whales they are migratory and travel north from the Antarctic toward tropical waters, generally steering away from coasts in effort to stay undetectable. Sadly, this species is on the endangered list due to whale hunting that took place until the last century. 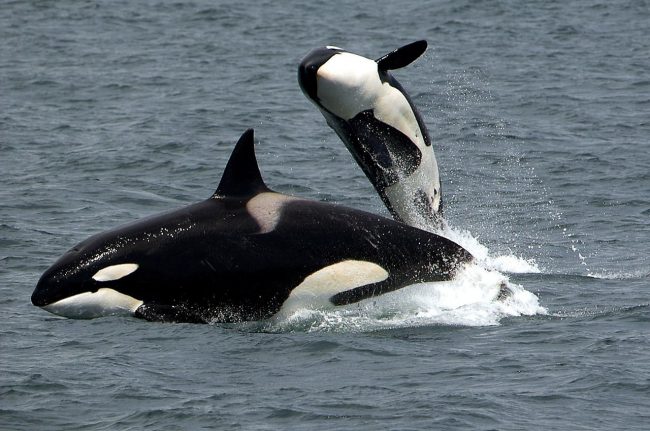 The next most observed species in Antarctica are penguins. There are more than seventeen species worldwide, but only seven found in the Antarctic. Penguins are not known to become aggressive around humans, and sometimes even wander close to you. However, it is best to remain cautious as they can and do bite if they feel threatened. The first of these species is called the Adélie, which remain on the continent all year long. It is extremely hard to tell the males and females apart from one another, as there are few clues to indicate their gender. These penguins are considered egalitarian, which means both parents take equal care of the offspring.

The next penguin species is the largest of all — an Emperor, coming in at four feet tall and weighing up to 100 pounds. That is the size of a small human! Emperors are also known to breed on sea ice and almost always live their lives without ever going onto land. Fascinating! They have a tight knit community and gather in large groups to stay warm in the colder months.

The next species is a Chinstrap penguin. These penguins get their name from their unique markings that look like a helmet chinstrap. They are also one of the most dramatic of the species when it comes to mating. They will sometimes force other penguin couples out of their nests if they cannot find a place they like for their own nest. They will move on after five days if their original mate does not show up, but the female penguins will also fight for the males’ attention if there is more than one. 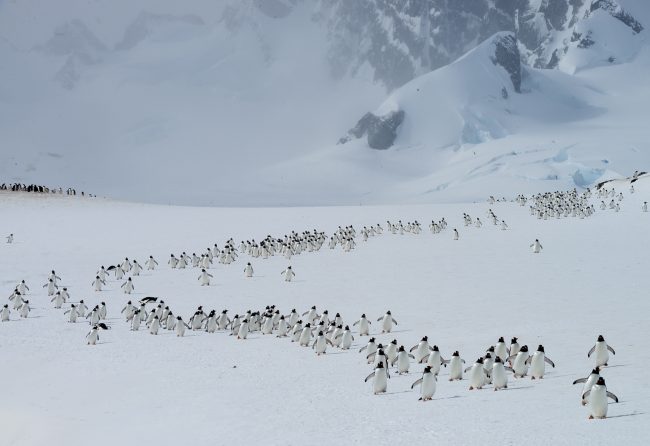 Gentoos are the next penguin species and they are speedy. They can reach speeds up to 22 miles an hour when diving, and that is fast! This species also spends most of their days hunting small ocean fish and although they are larger than most penguins they are still quite small compared to the emperor. King penguins look similar to emperor penguins in their markings, but they are a much lighter black compared to all other penguins, they look more grey than black. This species also spends most of its time in northern Antarctica and only part of the year there. The Macaroni penguin also lives on Antarctica part of the year but do make their way to some of the surrounding islands. Macaroni’s are fairly small and one of the most common species of penguins. They have small markings on their eyebrows, which are similar to other penguins but instead of yellow they are orange.

The last species of penguins are the Rockhoppers. As their name suggests they move around by jumping from rock to rock in the Antarctic. They also have short spiky hair that goes to the base of their head and sticks out on the sides. It is fairly crazy to see, especially when the common person thinks of penguins they think of the gentoo or king and how they look, when most of the species actually have spiky hair, but it looks different on each species.

The name “Antarctica” comes from the Greek language, and stems from the phrase “opposite of the Arctic.” This definition isn’t very helpful until you find out what “Arctic” means, which equates to “of the bear.” Thus, “the Antarctic” means “the land opposite of the bear”, which is true! In the Arctic, there are polar bears, while in the Antarctic, there are no polar bears. But that’s not why the term came about. 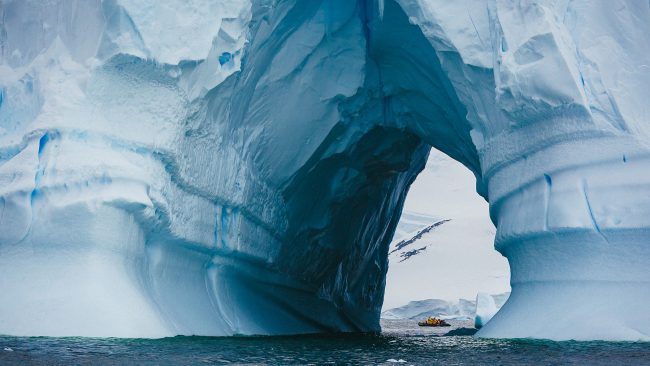 In the northern part of the sky, there is the constellation Ursa Minor, the Little Bear. This constellation contains the Polar Star and marks the North Pole. Antarctica then names the place opposite of the Little Bear, the South Pole. The “Ant” part is the same root as “Anti-,” so you can remember it as being the anti-arctic if that helps.

Before the continent of Antarctica took its name, there were some places with the same name far south, such as the French colony of France, Antarctique, in the 16th century. Only in the 1890s did the Scottish cartographer, John Bartholomew, name the frozen continent officially. Though, it had been discovered decades earlier. 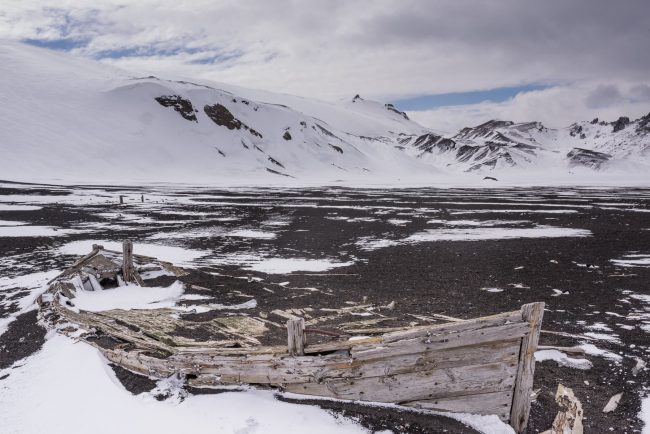 In fact, people thought there must be an equivalent area to the Arctic on the South Pole as early as the 2nd century AD. They theorized it was a vast continent, called Terra Australis, which they proved to be true after sailing the Cape of Good Hope and Cape Horn by the 16th century. They deduced that it was indeed a continent as it was surrounded completely by the sea, and not connected to any other land. Some people even believed it may be populated.

You may be wondering if now, all this time later, are there people living on Antarctica? There is a small Antarctica population, mainly researchers, but nothing close to cities or towns. 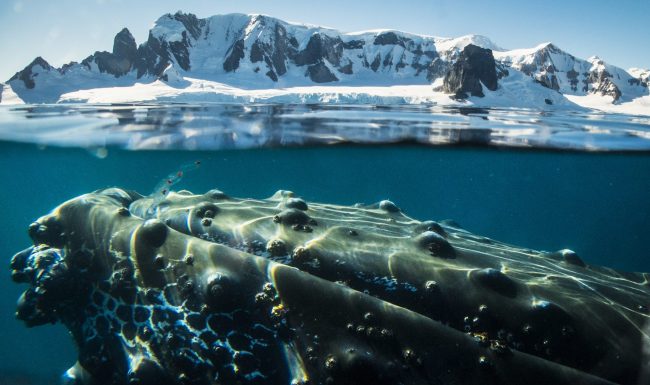 Antarctica vs. The Antarctic

The Antarctic refers to the larger polar region surrounding the South Pole. This includes not only Antarctica, but also a series of island territories on the Antarctic Plate. The area roughly encompasses the 60th Parallel South and covers approximately 20 percent of the Southern Hemisphere.

Antarctica is the continent that takes up most of the Antarctic region and is the 5th largest continent by land mass in the world. 98% of its surface is covered with an ice sheet with an average thickness of 1.2 miles (1.9 km). This is surrounded by the Antarctic Convergence, where the north-flowing Antarctic waters encounter the warmer waters of the Atlantic and Pacific oceans above. Seven nations have staked claims to different parts of the continent, including Argentina, Australia, Chile, France, New Zealand, Norway, and the United Kingdom. 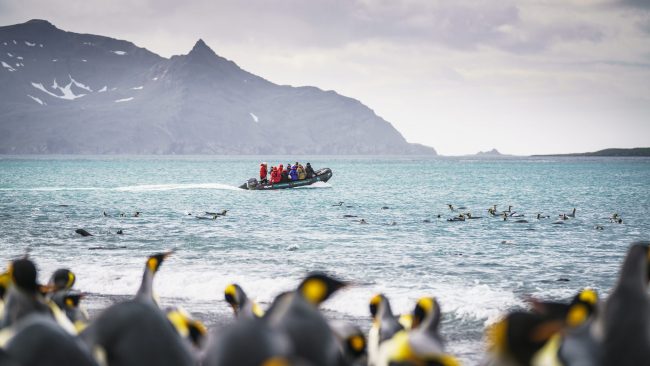 The other difference in the use of the two terms is that ‘Antarctic’ can be used as an adjective, for example, an Antarctic rock, or some Antarctic ice. The term “Antarctica,” on the other hand, can only refer to the proper name of the icy continent surrounding the South Pole.