The Arctic Fox lives in the Northern hemisphere, a native to many regions of the Arctic. It has a thick white coat that provides thermal insulation, as well as camouflage. Sometimes known as the snow fox, polar fox, lemming fox, or the white fox, the Arctic Fox has many names. Their fur can insulate them enough to create a thermal differential (between the external environment and internal environment) of 90-100 degrees Celsius.

Read more about this Arctic resident below!

How long do Arctic Foxes live?

What does the Arctic Fox eat?

The natural prey of the Arctic fox includes lemmings, voles, ringed seal pups, fish, waterfowl, and seabirds. During April and May, ringed seal pups are especially favorable to these foxes. The fox may also eat seaweed, berries, carrion, insects and other smaller invertebrates. When food is overabundant, the Arctic fox will bury their extra food. They eat a significant amount of bird-eggs. These fox can steal greater snow geese eggs at a speed of 3-7 eggs per hour and store several of them (80-95%). These eggs can be eaten up to a year later once they have been stored. This is ideal for foxes storing eggs in the summer for the following mating season in the Spring.

Where do Arctic Foxes live in the Arctic?

These fox often inhabit underground and slightly above ground dens. In these dwellings their warmth is conserved and they can raise their young safely. Arctic foxes are monogamous during the breeding season.

How big are Arctic Foxes?

On average, they grow to about 2 feet long with the females reaching a few inches shorter than that (around 20 inches long). Their tail adds on average 12 inches of length. These fox are typically shorter than a foot measured at the shoulders. A male can vary in weight from seven to 21 pounds. Females weigh less with a range of three to seven pounds.

How does the Arctic Fox tolerate exposure to such cold Arctic temperatures?

Insulating with their thick coats, they will curl into tight balls. They cover their legs and head with their furry, warm tail. The fur of the Arctic Fox provides the best insulation of any species of mammal. These fox are the only canines to have fur on their foot pads. This reduces the foxes surface exposed to the cold and protects its lesser insulated parts of their body. As mentioned above, the foxes stay out of the Arctic winds by staying in their dens. They will not shiver until the temperature drops below -70 degrees Celsius (-94 degrees Fahrenheit). Most of their dens are built facing south where they can have adequate solar exposure to warm up their home. By reducing their physical exercise they can preserve body fat and stay warm year round. The Arctic Fox can increase its physical weight (in fat) by up to 50% by the start of winter. Arctic Foxes do not hibernate so this can help for when prey is scarce and winters are colder.

When and where do Arctic Foxes breed?

The breeding season for the Arctic Fox lasts throughout April and May. With a gestation period of almost two months, pups are born during June and July. Litter sizes can consist of up to 25 pups (the largest litter size amongst carnivores). The lemming fox population density correlates to reproduction rates of the Arctic fox. With an abundant amount of lemmings, these foxes can easily give birth to 18 pups. The population density of lemmings cycles every 3-5 years and so the Arctic Fox population does as well.

When do baby Arctic Foxes leave the den?

The pups start to leave the den at about one month old and are weaned by two months of age. Their dens can typically be found in long ridges of dirt and rock called eskers. The foxes will make complex networks within the dens to protect themselves against predators during their breeding season. Many of these dens are recycled by new fox families the following year and some may remain in the same family for generations.

Can the Arctic Fox hear well?

Studies have shown the Arctic Fox has less sensitive hearing than dogs. That being said, the Arctic Fox can hear lemmings burying under the snow (about 5 inches beneath the snow layer).

Can the Arctic Fox smell well?

The Arctic Fox has a keen sense of smell and can detect a carcass up to 40 km away. They can smell lemmings up to 30 inches below snow.

What subspecies of Arctic Fox exist?

Where specifically can I find the Arctic Fox?

The Arctic Fox lives in northern Europe, northern Asia, and Northern American in a circumpolar distribution. Its range may include Greenland, Iceland, Svalbard, Fennoscandia, Jan Mayen, Canada, Alaska, northern Russia, and islands in the Bering and Barent sea. It was introduced to the Aleutian islands, but is now being eradicated due to declining bird populations. The typical environment in tundra and pack ice, and may be found anywhere from sea ice to an elevation of 10,000 ft above sea level. The Arctic Fox is the only native mammal to Iceland. It’s coat color also correlates to its distribution with the white coat being found in the more white, snowy regions, and the blue coat being found in the boreal forest and more rocky areas. st

Some Arctic Foxes migrate. The foxes that live closer to geese populations are less likely to migrate away as the geese provide a steady food source. Foxes that do not have access to high density lemming populations will be more likely to make sea ice trips. Foxes that migrate have a greater than three times mortality rate than resident foxes. Residency is therefore common and helps to establish Arctic Fox territories. As the foxes age they become more likely to migrate.

New Zealand has classified this fox as a “prohibited new organism” and has banned this fox from importation into the country under New Zealand’s Hazardous Substances and New Organisms Act 1996. 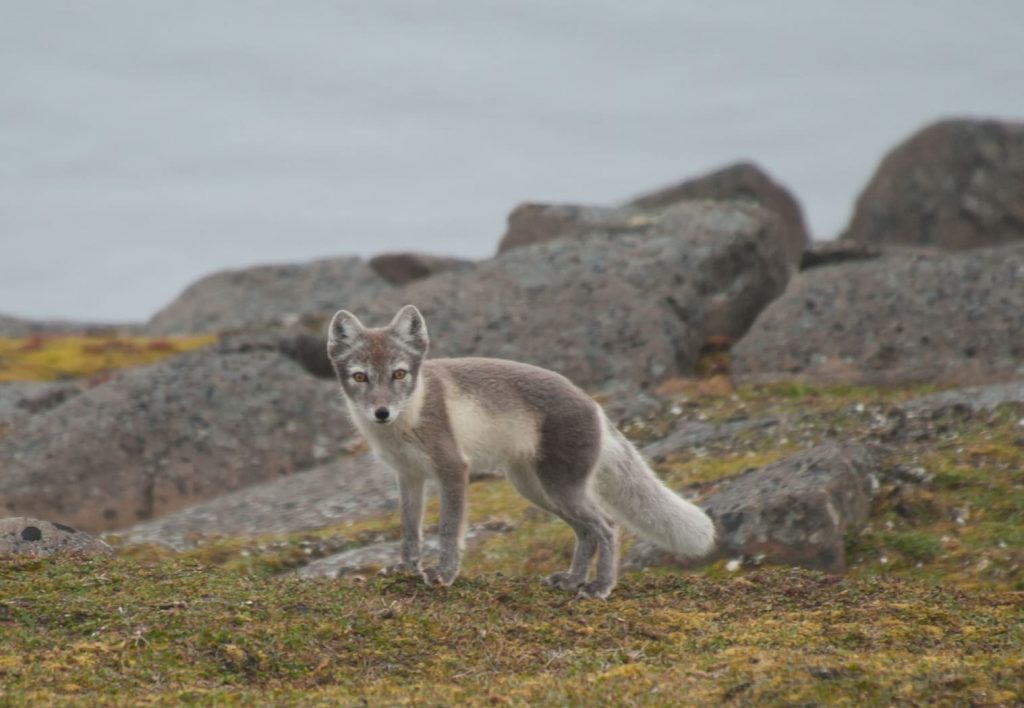 How many Arctic Foxes are there? Are they a protected species?

The population is estimated around several hundred thousand foxes in total, and they do not have any legal protection. This could be due to their large litter sizes. The Scandinavian mainland population does have an acutely endangered status with an estimated 200 foxes in total. They benefit from legal protection from hunting and persecution in Finland, Norway and Sweden, and have for decades. Uncontrolled trapping has almost eradicated the subpopulation. The Arctic fox is being overtook by the larger Red Fox. As climate change decreases the amount of sea ice and snowy backgrounds, the white fur coat of this fox becomes less valuable as camouflage. In addition, since a natural predator of the red fox, the grey wolf, has been hunted to near extinction, the red fox population has grown.

Ready to Book Your Polar Expedition?

Ready to find your dream cruise?  Have questions? Contact Polar Holidays to schedule a free consultation with one of our booking specialists today!