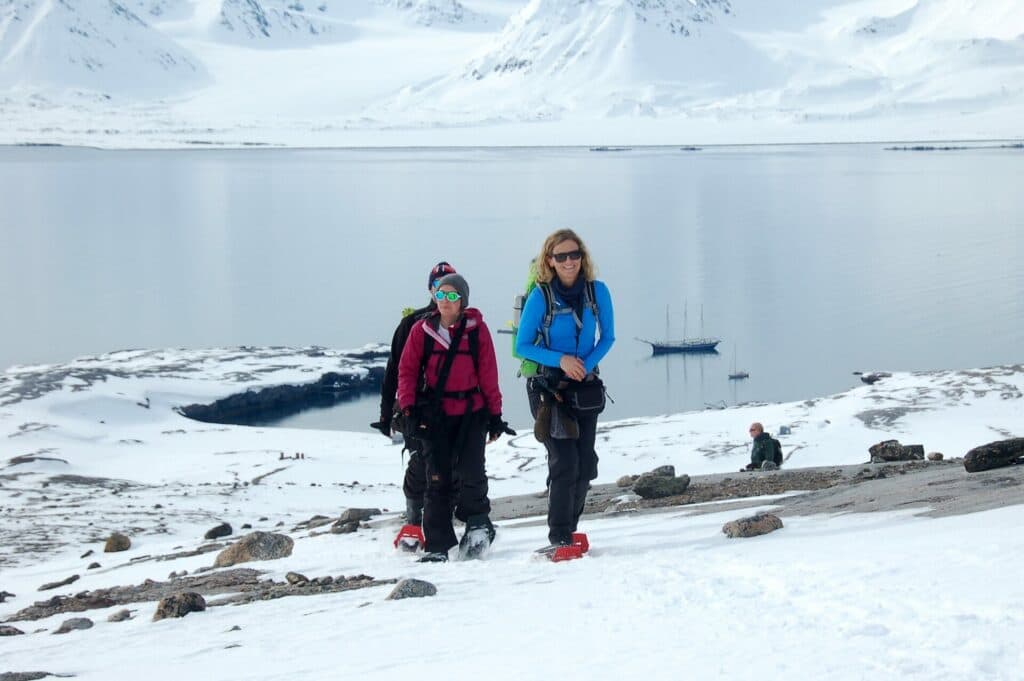 Cruise along the pack-ice of North Spitsbergen for a great chance of spotting Polar Bears. You’ll sail into beautiful fjords found on the north coast of West Spitsbergen, a fantastically beautiful fjord crested with spectacular glaciers and home to Ringed and Bearded Seals. The shorelines and cliffs support thriving seabird colonies that in turn provide fertilizer that supports a surprisingly rich array of vegetation.

You head north for Kongsfjorden and Krossfjorden. The landscape is likely to show signs of winter, the crags and slopes still blanketed with snow. Here there are rich opportunities for snowshoeing – we provide the snowshoes – and visiting places of historic interest: Ny London, where you can see the remains of early 20th-century marble mining, and Ny Ålesund, the northernmost community in the world. There are also research stations and the famous anchor mast of the dirigible Norge, which took the first flight across the North Pole to Nome, Alaska in 1926. Krossfjorden offers views of colossal glaciers and lofty mountain peaks, but ultimately the extent of fjord ice dictates the itinerary here.

Cutting south between the main island of Spitsbergen and Prins Karls Forland, you may encounter walruses at Poolepynten, a common haul-out site. You also have views of St. Johnsfjorden, near Gaffelbreen. The winter ice may not have loosened its grip on the water here, and seals (ringed and bearded) could be numerous in the area.

You now double back into Isfjorden and venture to Ymerbukta, possibly embarking on a walk in this mountainous area. Here you find an expansive tundra with its own avifauna, depending on when spring arrives, as well as spectacular geological formations along the coast. Further northeast, near Ekmanfjorden, you have the chance for another hike. Common to this area are numerous glaciers that terminate near or in the sea. In Gipsvika you can go on shore near the cliff of Templet, a mountainous location of eroded sedimentary rock from the Upper Carboniferous period – around 290 million years ago.

NB: Deviating program as mentioned in the day-by-day itinerary.

At the end of a long Arctic winter, spring is starting to awaken. The climate, however, still clings to the cold: ice-covered mountains, snow-swept shores, temperatures around –4° C (25°F). It’s a good time to experience the last of the winter scenery, and with a little luck, also see some polar bears, walruses, and seals into the bargain. Bird note: It is still somewhat quiet on the cliffs, as this time of year the cliff-nesting birds are only just arriving to pick out their breeding places. By May all the nesting birds will have arrived, and the breeding will take place later in June. All itineraries are for guidance only. Programs may vary depending on local ice, weather, and wildlife conditions. Landings are subject to site availabilities, permissions, and environmental concerns per AECO regulations. Official sailing plans and landing slots are scheduled with AECO prior to the start of the season, but the expedition leader determines the final plan. Flexibility is paramount for expedition cruises, and willingness to compromise on comfort is a basic requirement on board a historic sailing vessel. Important information about the use of sails: The vessel is equipped with sails to be used in good conditions (based on open sea, water depth, wind, and time allowance), but the use of sails is not guaranteed. The captain decides whether to use the sails or the engine. If sails are used, the crew will operate them. Guests must follow the safety instructions of the team. The average cruising speed for s/v Rembrandt van Rijn is 6.5 knots.