The Geology, Geography, and Climate of Antarctica

Come and discover even more about Antarctica. On the underside of the world, surrounded by the Southern Ocean, the icy fifth-largest continent sits and waits to be explored. In this page, we will discuss the geography, climate, and geology of this beautiful landscape. 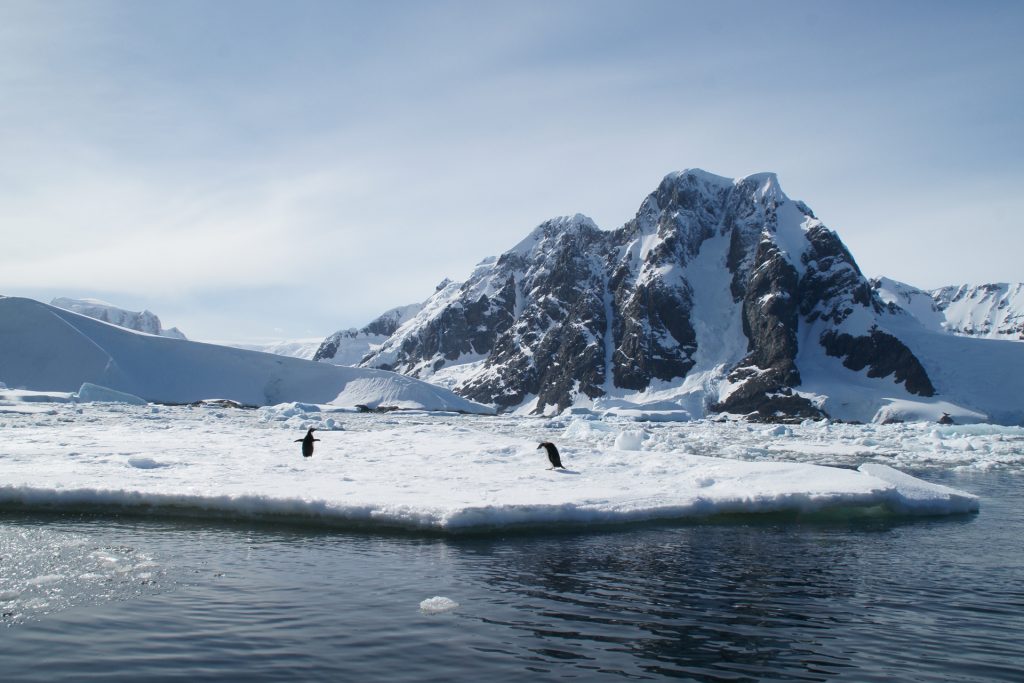 The geography of Antarctica is dominated by its south polar location and, thus, by massive amounts of ice. The Antarctic continent, located in the Earth’s southern hemisphere, is centered asymmetrically around the South Pole and largely south of the Antarctic Circle. It is washed by the Southern (or the Antarctic) Ocean or, depending on one’s definition, the southern Pacific, Atlantic, and Indian Oceans. It has an area of more than 14 million km² making it twice the size of Australia and about 1.5x the size of Europe.

Some 98% of Antarctica is covered by the Antarctic ice sheet, the world’s largest ice sheet (about 90% of all ice) and also the largest reservoir of fresh water (70%). Averaging at least 1.6 km thick, the ice is so massive that it has depressed the continental bedrock in some areas more than 2.5 km below sea level; subglacial lakes of liquid water also occur (e.g., Lake Vostok). Ice shelves and rises populate the ice sheet on the periphery. The northern part of the Antarctic Peninsula in contrast to the rest of the continent is far less icy and makes up a bulk of the 2% that is not covered by ice.

Antarctica is the windiest, driest, coldest and highest in average elevation of all other continents on the planet. Antarctica is a polar desert, with less than 8 inches of rain annually and much less far inland. The continent is divided into two parts by the Transantarctic Mountains that bridges between the Ross and Weddell Seas. This mountain range runs roughly north to south along the Greenwich meridian. This divides the continent into East and West Antarctica. The continent is so cold and dry that the ice evaporates before ever becoming water, a process called sublimation. The amount of sublimation is greater than the amount of precipitation leading to a net loss of mass on the continent.

The West Antarctic Ice Sheet has been a topic of discussion with climate change. The collapse of this sheet could raise ocean levels by several meters over the course of centuries leading to the loss of land worldwide. East Antarctica is geographically made up of Coats, Enderby, Mac Robertson, Wilkes, Queen Maud, and Victoria Lands. The eastern part of Antarctica, like the western, is covered by an Ice Sheet.

The highest peak in Antarctica is Vinson Massif (16,000 ft), located in the Ellsworth Mountains. The most active southern volcano, Mount Erebus, can also be found on Ross Island, Antarctica. Minor eruptions are common and have been documented in the past and even lava flow has been observed. 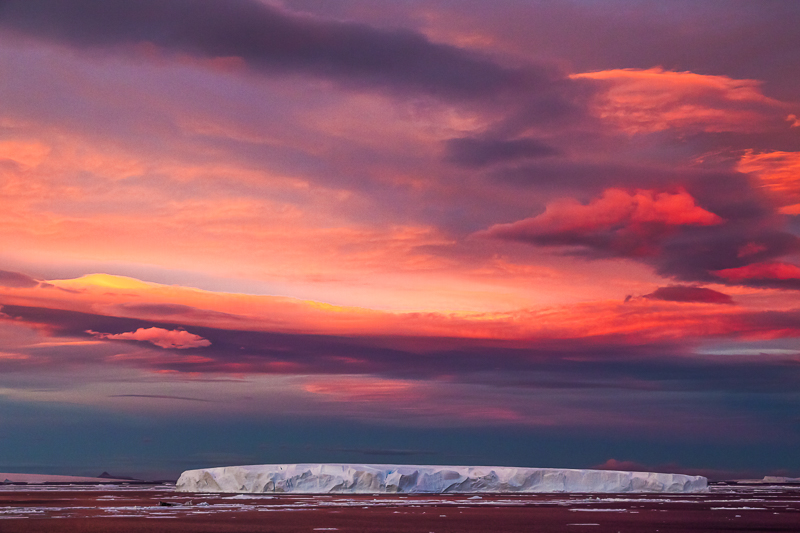 More than 70 lakes lie beneath and at the feet of the continental ice sheet, the largest being Lake Vostok. Ice core drilling has shown that this lake may contain microbial life. This holds significance as Lake Vostok has often been compared to the surface lakes of Europa, Jupiter’s moon. If life can be found at such conditions on Earth, it stands to reason that life could exist on Europa as well. 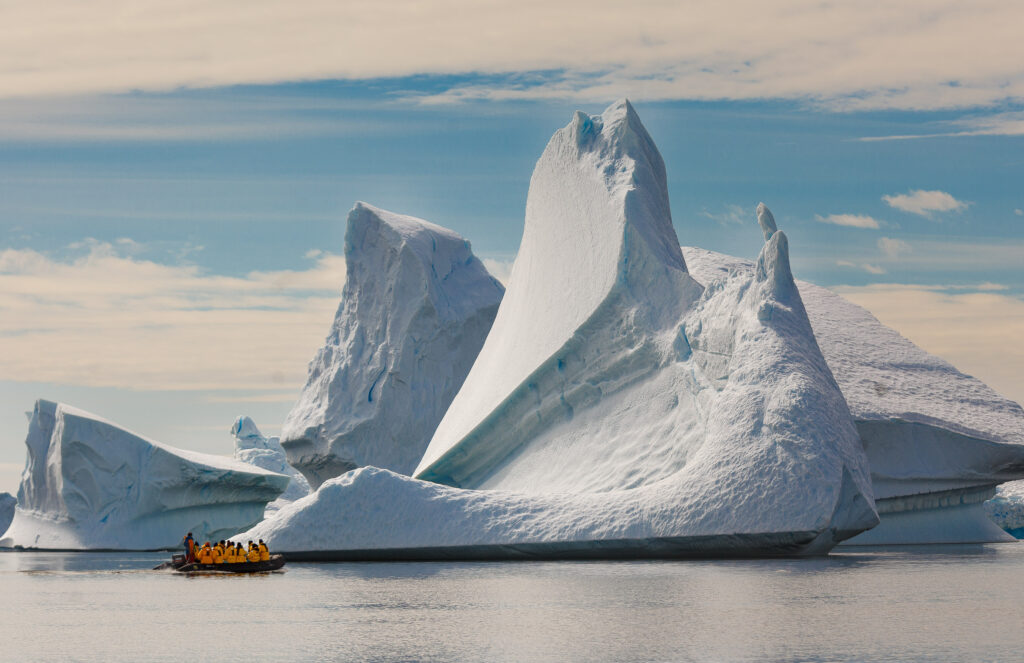 Do you like snow? Sun? Hail? Strong winds? You may experience all of it when visiting Antarctica! The most accurate forecast you will get is “it may change”. While there are some differences in weather during the Antarctica cruise season, the weather tends to be variable, with temperatures of 50-70 F (10-15 C). Antarctic temperatures have reached as low as -128.6 degrees Fahrenheit (-89.2 degree Celsius). Antarctica is the coldest of all of Earth’s continents. As mentioned in our geology section, the continent was not always covered with ice and was ice-free as recent as 34 million years ago. The South Pole receives less than 4 inches of precipitation annually, fitting for a dry polar desert.

Sunburn is a large concern for tourists and explorers as most of the UV radiation falling on the continent is reflected by the snow. In fact, during the summer, more solar radiation reaches Antarctica than the Equator due to the extended days. In terms of east and west, East Antarctica is colder than West Antarctica. This is due to the elevation difference, the East being higher in elevation than the West. Heavy snowfall is possible on the more coastal areas of the continent with a previously recorded rate of about 4 feet of snow falling within 48 hours.

The southern lights, or the aurora australis, can be observed in the night sky around the South Pole. Plasma-full solar winds pass by the Earth’s magnetic field creating beautiful colors that are observed on the visible light spectrum. Diamond dust is another Antarctic phenomenon. Resembling fog, it hugs the ground on clear nights and its icy appearance glints like tiny diamonds. A third phenomenon called a “sun dog” can also be seen and appears during the day. Due to the optical position of the Earth relative to the sun, it is sometimes possible to see two or three suns within a 22-degree halo. 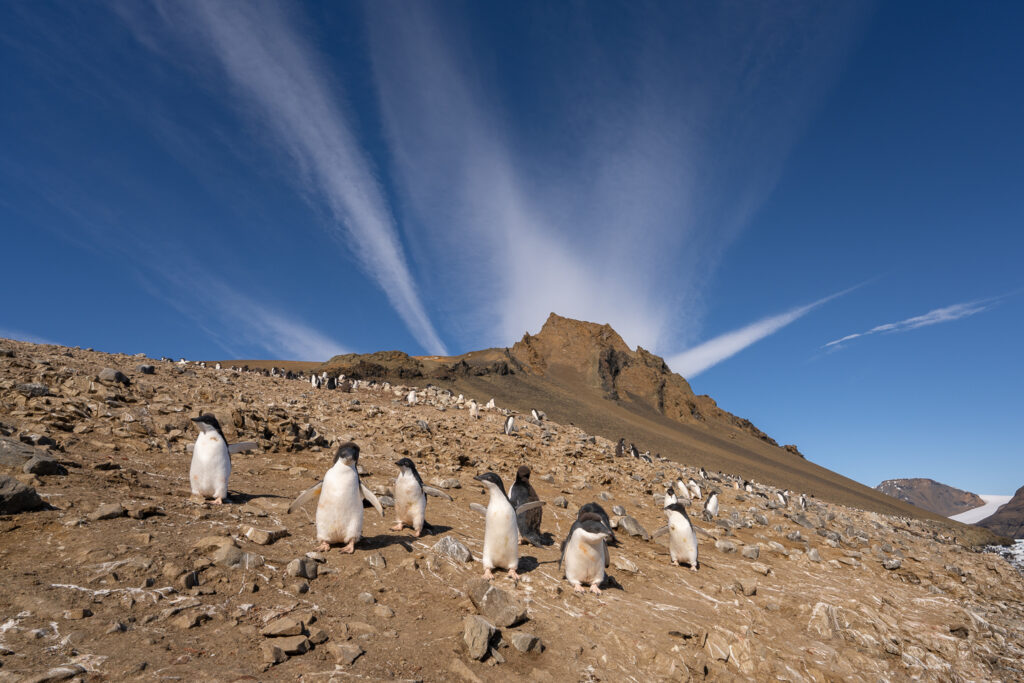 Yes, there are rocks! More interestingly, there is a rich geological history. Did you know that Antarctica was part of a supercontinent Gondwana? That was 170 million years ago, when Asia, Africa, Antarctica, and Australia were all connected. Gondwana then slowly broke apart, and Antarctica was formed. That was only 35 million years ago. Antarctica at many points in its history had a more tropical or temperate climate, had forests, and was home to ancient life forms. This climate was possible by its more northerly position on the globe.

The geological study of the continent has been challenging due to the amount of ice deposited on the surface. We have been able to subglacial surveys using new techniques such as remote sensing, satellite imagery, and ground-penetrating radar.

West Antarctica has similarities to the Andes mountain range, with igneous intrusions and volcanism. The most commonly found rocks are andesite and rhyolite volcanics which formed in the Jurassic period. The eastern part of Antarctica is composed of metamorphic and igneous platforms, coal, sandstones, limestones and shales from the Devonian and Jurassic periods which helped to form the Transantarctic Mountains. The main mineral on Antarctica is coal and the most valuable resources of Antarctica are oil and natural gas fields that can be located to the Ross Sea. Mining and exploitation of these resources are banned by the Protocol on Environmental Protection to the Antarctic Treaty until 2048.

Ready to Book Your Polar Vacation?

Contact Polar Holidays to speak with one of our booking specialists today!