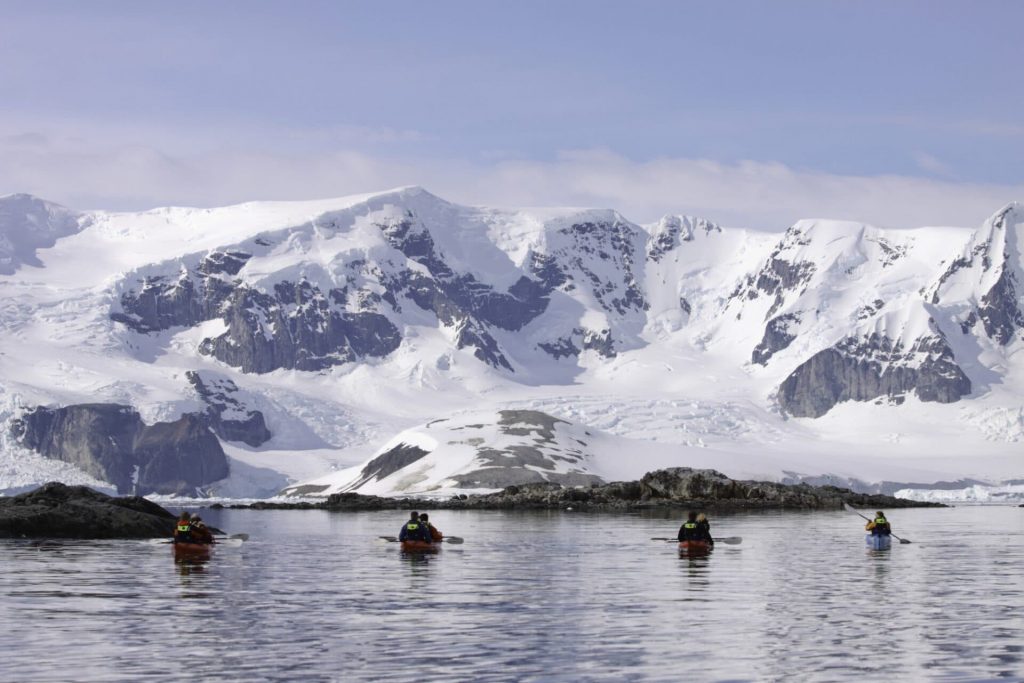 “Base camp” is by definition a temporary storing and starting place, from which an activity starts. We offer “activity modules” which go beyond our normal shore program. The vessel will stay for two or three days at specific locations to serve our active passengers as a comfortable hub to allow more time than usual for wide ranging activities.

Neumayer Channel – The vessel may position itself here, launching its multiple basecamp activities from the protected waters around Wiencke Island. You can enjoy the splendors of this alpine environment at sea with Zodiac and kayaking trips, or if you’re in the mood for a walk, there are possible snowshoe hikes and soft-climb mountaineering options farther inland. Naturally, favorable weather conditions determine the possible activities.

Port Lockroy – After sailing through the Neumayer Channel, you may get a chance to visit the former British research station – now a museum and post office – of Port Lockroy on Goudier Island. You may also be able to partake in activities around Jougla Point, meeting gentoo penguins and blue-eyed shags. At the nearby sites, such as Damoy Point there may be the opportunity for snowshoeing to the old ski-way, this is also one of our favourite camping sites.

Pléneau & Petermann Islands – If the ice allows it, you can sail through the Lemaire Channel in search of Adélie penguins and blue-eyed shags. There’s also a good chance you’ll encounter humpback and minke whales here, as well as leopard seals. Kayaking, glacier walks, and more ambitious mountaineering trips are the potential activities of this location.

Paradise Bay – You have the chance to make camp here like a true polar explorer, enjoying a supreme overnight Antarctic adventure.

Errera Channel – Possible sites in this area include Danco Island and Cuverville Island, but also the lesser known (though equally picturesque) Orne Island and Georges Point on Rongé Island.

On your last day of near-shore activities, you pass the Melchior Islands toward the open sea. Keep a sharp lookout for humpback whales in Dallmann Bay. You might also shoot for Half Moon Island, in the South Shetlands, with further chances for activities.