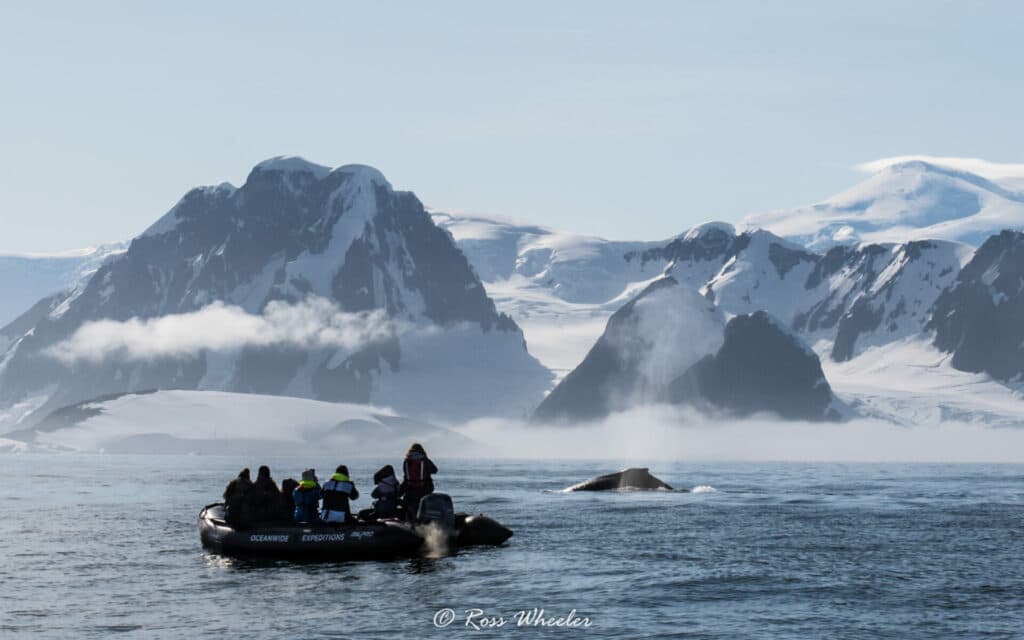 This voyage explores a number of historically significant Antarctic areas, such as the very rarely visited Bellingshausen Sea, Marguerite Bay, and Alexander Island. We focus on places discovered by Adrien De Gerlache on his Belgian Antarctic Expedition (1897 – 1899) and Jean-Baptiste Charcot on his French Antarctic Expedition (1904 – 07).

Beyond the Polar Circle

This voyage is a true expedition, exploring the rarely visited region of the Bellingshausen Sea, Marguerite Bay, and Alexander Island. We explore many of the places discovered by Adrien de Gerlache on his Belgian Antarctic Expedition (1897 – 1899) aboard the Belgica. This voyage leaves Ushuaia and heads straight beyond Antarctic Circle, where we aim to spend the rest of the trip. The variety of landings and wilderness in this region are rivalled by few other places on Earth.

We will see Antarctic ice shelves, land on islands where few people have set foot, and enjoy this awe-inspiring area far from the beaten track of regular Antarctic cruises. We may also see a range of exotic wildlife, including humpback and minke whales, orcas, and a variety of seals: leopard, elephant, crabeater, Weddell, Antarctic fur, and maybe even a Ross seal. Gentoo and Adélie penguins, skuas, terns, and giant petrels are just some of the bird species we may see as well.

Over the next two days on the Drake Passage, you enjoy some of the same experiences encountered by the great polar explorers who first charted these regions: cool salt breezes, rolling seas, maybe even a fin whale spouting up sea spray. After passing the Antarctic Convergence – Antarctica’s natural boundary, formed when north-flowing cold waters collide with warmer sub-Antarctic seas – you are in the circum-Antarctic upwelling zone.

In the afternoon we sail to the Fish Islands and encounter one of the southernmost Adélie penguin and blue-eyed shag colonies in the Antarctic Peninsula.

Spending the night in the area of Crystal Sound the scenery will leave you staying up until the small hours, there is a chance to see Orca, Humpback and Minke Whale in this area.

Detaille Island – You may make a landing at an abandoned British research station here, taking in the island’s lofty position and imposing glaciers scenery.

We then sail through The Gullet, one of the most impressive narrow channels in Antarctic, with towering mountains either side, birds following the ship and playful penguins and seals frolicking in the water as we sail through this very special part of the journey. If ice conditions allow we will also carry out a landing or cruise in the afternoon.

Discovered and charted by the famous explorer Charcot, Pourquoi Pas offers a pleasant landing on a rocky beach against the backdrop of the mighty Moider Glacier. A gentle walk from the landing site provides an impressive view, while Antarctic furs seals relaxing behind the beach are a nice addition to the wildlife we’ve encountered on this voyage.

After lunch we head toward Horseshoe Island, named for its distinctive shape. An abandoned research station provides an insight into the early days of scientific research, and original artifacts show how different life was in those pioneering days. The hut is set among some of the most beautiful scenery in Antarctica, with views over the mountains and snow of Pourquoi Pas Island as well as Horseshoe Island’s mountain range. This is a photographic landing in many senses. Two old wooden boats even remain at the landing site as if waiting for their final launch.

Provided ice and weather conditions allow, you next head toward Antarctica’s ice shelves (the George IV and Wilkins). Here we hope to show you the scale of these vast cliffs and expanses of ice that will dwarf us and our ship. A range of Antarctic wildlife like humpback whales, fur seals, Adélie penguins, and maybe even one or more Ross’ seals may appear.

Jenny Island will give another aspect to your Antarctic experience, offering raised beaches, hanging glaciers, and moss carpets. The island is also popular with wildlife: Terns, skuas, elephant seals, leopard seals, and Adélie penguins are all regular visitors.

A landing at Leonie Island will take your breath away. There is also the possibility to take a hike to the peak of the island, giving you a dramatic panorama of Marguerite Bay and Adelaide Island.

Lagoon island is the most northern island of the Leonie Islands group, also discovered and charted by Jean-Baptiste Charcot. This low laying island will provide a stark contrast to the previous days with its gently sloped beaches and flat areas to explore. The wildlife here will varies depending on snow cover. If there is little snow the ground is almost desert-like in appearance.

The Mikkelsen Islands offer a spectacular Zodiac cruise where we hope to encounter up to five Antarctic seal species. We may also see some beautiful birdlife, such as giant petrels and Adélie penguins.