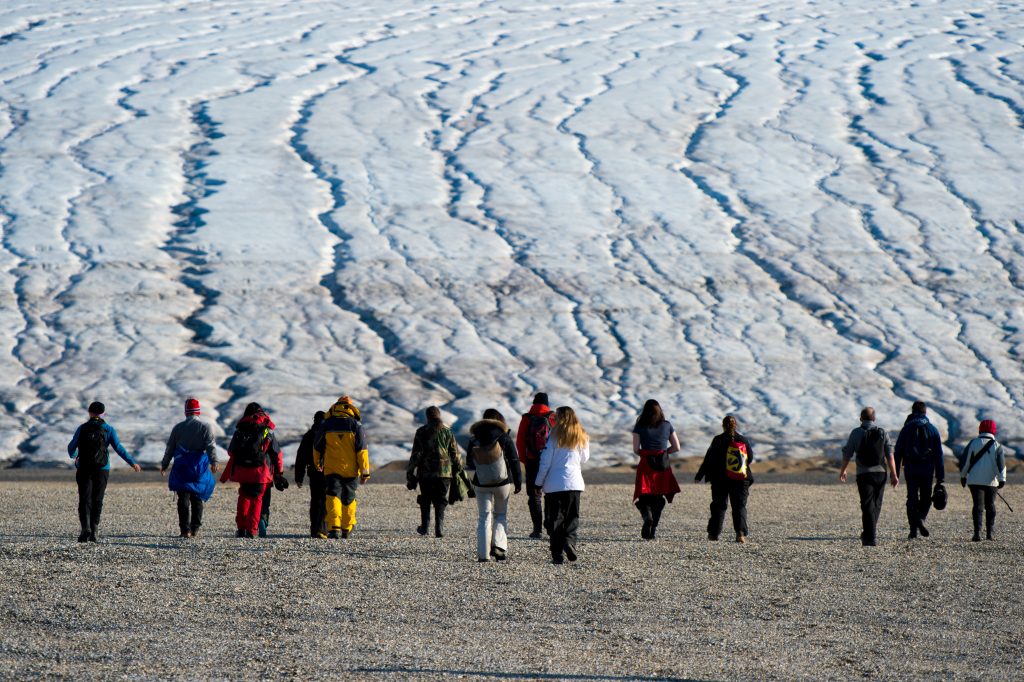 Around Spitsbergen – Kvitoya, In the realm of Polar Bear & Ice

Voyage around Spitsbergen where we also visit Kvitøya. We have chances to see the King of the Arctic, Walruss, Reindeer, various bird species and surprisingly beautiful flora. We hope to get to the rarely visited Kvitøya farthest to the east, close to the Russian territory. The island is dominated by an icecap, which leaves a small area bare of ice and snow. We will land at the western tip at Andréeneset, where the Swedish explorer Andrée and his companions perished in 1897. We will also try to get to Kraemerpynten in the east, where an enormous group of Walrus resides.

The northernmost point of your voyage may be north of Nordaustlandet, in the Seven Islands. Here you reach 80° north, just 870 km (540 miles) from the geographic North Pole. Polar bears and walrus inhabit this stark desolate landscape. Later in the day the ship may roam for several hours among the pack ice in search of wildlife.

Pushing east to Nordaustlandet, you reach the area where the Italian captain Sora tried to rescue the Nobile Expedition in 1928. The focus here is the great glacier front of Schweigaardbreen, though you may also land at Firkantbukta, getting the chance to gain some altitude and take a few higher-elevation photos. Alternately, you could make a Zodiac cruise near Storøya, where you might encounter walruses.

Today you try to reach the rarely visited Kvitøya, far to the east and close to Russian territory. The enormous ice cap covering this island leaves only a small area bare. You land at the western tip of Andréeneset, where the Swedish explorer S. A. Andrée and his companions perished in 1897. Another objective for the day is Kræmerpynten, where a sizable group of walruses reside.

South of Nordaustlandet you may land on Isisøya, formerly a Nunatak area surrounded by glaciers but now an island surrounded by the sea. You then may pass by Bråswellbreen, part of the largest ice cap in Europe and famed for its meltwater waterfalls.

N.B. The chances that we can reach Kvitøya and complete a full Svalbard circumnavigation (based on our experiences from 2013—2019) are about 70%. In case we cannot complete a full circumnavigation, we may make a circumnavigation of Spitsbergen through Hinlopen Strait. All itineraries are for guidance only. Programs may vary depending on ice, weather, and wildlife conditions. Landings are subject to site availabilities, permissions, and environmental concerns per AECO regulations. Official sailing plans and landing slots are scheduled with AECO prior to the start of the season, but the expedition leader determines the final plan. Flexibility is paramount for expedition cruises. The average cruising speed of our vessel is 10.5 knots.