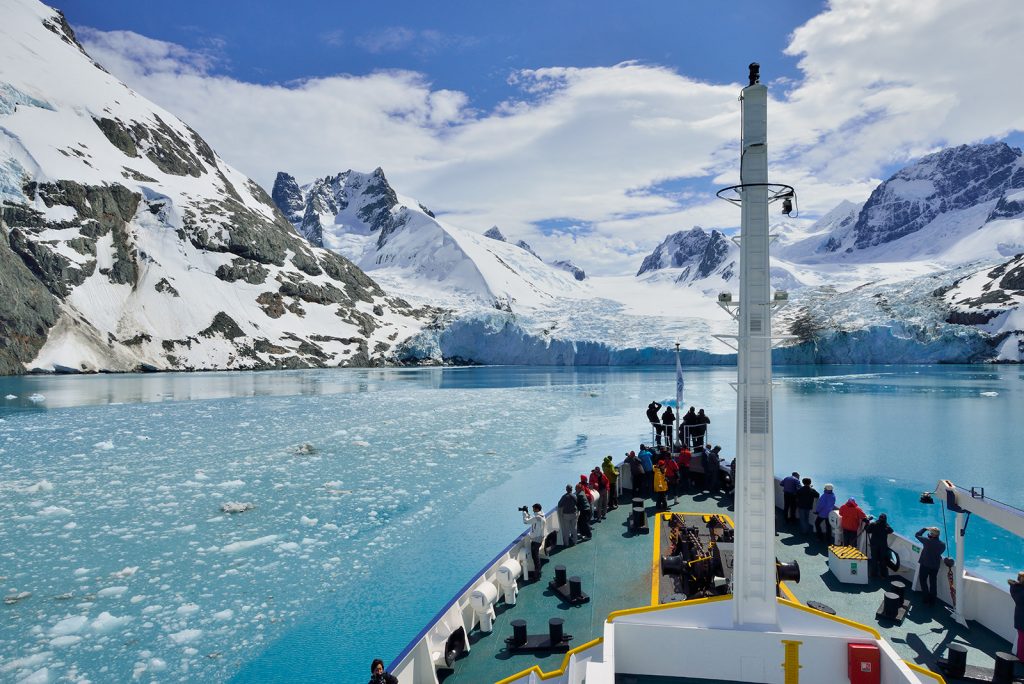 Few places compare to South Georgia in terms of exotic wildlife and jaw-dropping scenery. On this exploratory voyage you can enjoy wandering albatross colonies while also seeing some of the biggest breeding spots for king penguins and elephant seals on Earth – along with day after day of amazing polar scenery.

En route to South Georgia, you cross the Antarctic Convergence. The temperature cools considerably within the space of a few hours, and nutritious water rises to the surface of the sea due to colliding water columns. This phenomenon attracts a multitude of seabirds near the ship, including several species of albatross, shearwaters, petrels, prions, and skuas.

This small group of 6 islands on the South Georgia Ridge in shallower waters. The nutrient-rich waters in this area offers a lot of food for birds and whales. The islands are named after the South Georgian Shags, known for their bright blue eyes and yellow patch on their beak.

Today you arrive at the first South Georgia activity site. Please keep in mind that weather conditions in this area can be challenging, largely dictating the program.
Sites you might visit include:

Salisbury Plain, St. Andrews Bay, Gold Harbour – These sites not only house the three largest king penguin colonies in South Georgia, they’re also three of the world’s largest breeding beaches for southern elephant seals. Only during this time of year do they peak in their breeding cycle. Watch the four-ton bulls keep a constant vigil (and occasionally fight) over territories where dozens of females have just given birth or are about to deliver. You can also see a substantial number of Antarctic fur seals here.

Fortuna Bay – A beautiful outwash plain from Fortuna Glacier is home to a large number of king penguins and seals. You may have the chance to follow the final leg of Shackleton’s route to the abandoned whaling village of Stromness. This path cuts across the mountain pass beyond Shackleton’s Waterfall, and as the terrain is partly swampy, be prepared to cross a few small streams.

Leith Harbour, Stromness, Husvik – These sites remind us of the scale of the whaling industry in the early 20th century. Elephant and fur seals breed and moult here. Gentoo penguins also occupy the landing sites. Antarctic prions and South Georgia dive petrels may be observed, especially in the area of Husvik.

Cobblers Cove, Godthul – At Cobblers Cove we aim for Rookery Point to see macaroni penguins. Light-mantled sooty albatrosses nest along the coastline and giant petrels can be observed as well. Godthul (Norwegian for “good cove”) was named by Norwegian whalers and seal-hunters and remains such as bones can still be found along the shore line. Beaches are the home of gentoo penguins and seals.

Royal Bay (Moltke Harbour, Will Point & Brisbane Point) – Moltke harbour in Royal Bay was named by the German International Polar Year Expedition in 1882 and some of the remains of their dwellings are still visible. The scenery of Royal Bay is beautiful, dark sandy beaches, followed by the green tussock colors and finally dominated by the snow and ice covered Ross Glacier. Royal Bay one of the windiest bays on the island, zodiac cruising is spectacular. Approx. 30,000 pairs of king penguins live here.

King Haakon Bay – British explorer Ernest Shackleton reached King Haakon Bay during his journey of 800 sea-miles by open boat “James Caird” from Elephant Island. From here he crossed to Stromness to ask for help to rescue his party at Elephant Island after they had left the Weddell Sea where their ship got crushed by ice. Elephant seals dominate the beaches. Birdwatchers will look out for South Georgia pipits, Antarctic prions as well as common diving and blue petrels.

There may be sea ice on this route, south polar skuas and snow petrels could join the other seabirds such as albatrosses and petrels trailing the vessel. Eventually we reach the Drake Passage and you’re again greeted by the vast array of seabirds remembered from the passage south.

You arrive and disembark in Ushuaia, commonly held to be the world’s most southern city. It is located on the Tierra del Fuego archipelago, nicknamed the “End of the World.” But despite this stopping point, the wealth of memories you’ve made on your Antarctic expedition will travel with you wherever your next adventure lies.